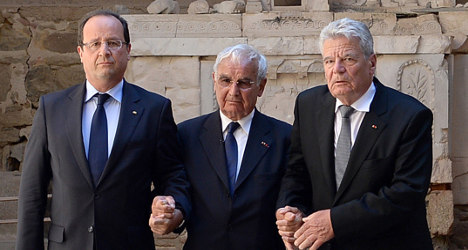 Francois Hollande (L) and his German counterpart Joachim Gauck (R) pose in the ruins of the church of Oradour-sur-Glane with survivor Robert Hebras, 88. Photo: Jean-Pierre Muller/AFP

Gauck was accompanied on the landmark visit by his French counterpart François Hollande as well as one of the few survivors of the atrocity, a historic moment of reconciliation.

The two presidents took a walk through the site of the massacre, which has been preserved in its entirety as a memorial, with Robert Hebras, 88, one of the last survivors of the World War II massacre in the central French village.

Hebras, whose mother and sisters perished that day, was briefly overcome with emotion as he explained what had taken place.

Hollande stepped forward to take his hand, Gauck placed a comforting arm around his shoulders and the three men then stood, hand-in-hand, in silence for several moments.

The town has become a ghostly war crimes museum since Nazi troops burnt it to the ground on June 10, 1944.

Six hundred and forty-two original inhabitants were massacred in Oradour and no one knows exacty why.

Women and chldren were massacred in the church before their bodies were burnt by a German SS division. Hebras is one of only three survivors still alive.

Speaking in front of war veterans and gathered members of the press from both countries Hollande said: “Our presence here is more than just symbolic. Our presence is the affirmation of a promise. A promise to defend the rights of man, every time they are violated, either near our home or far from here.”

His words can be taken as a nod to the violence in Syria, and the recent chemical weapons attack, which the French president has vowed to "punish".

Hollande also paid tribute to the presence of the Gauck, the first German leader to visit Oradour.

"You represent the dignity of a Germany able to confront Nazi barbarism, because right here, there was a crime against humanity. "

(Visitors wander through the ruins of the Oradour-sur-Glane. Photo: Jon's Pics)

The ruins they will visit include a church where women and children were locked in, before toxic gas was released and the building set on fire.

Some 205 children were among victims of the June 10, 1944 atrocity, which left deep scars in France.

After the war, French General Charles de Gaulle, who later became president, decided that the village should not be rebuilt but remain a memorial to the barbarity of Nazi occupation. A new village was built nearby.

In 1999, then French president Jacques Chirac dedicated a memorial museum which includes items recovered from what became known as the "Village of Martyrs".

"I want to reach out to the victims and tell them: I am at your side," Gauck told Europe 1 radio ahead of the visit.

"I am 73 years old, I was born during the war, I was steeped in thediscussion of our guilt… I will tell the victims and their families: We know what was done."

Gauck earlier said he had accepted the invitation to visit the site with "amixture of gratitude and humility". (The plaque on the wall outside the entrance to Orador-sur-Seine. Photo: Tangi Bertin)