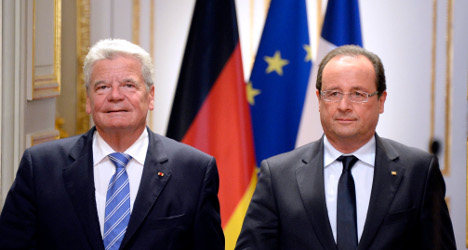 French President Francois Hollande and German counterpart Joachim Gauck will on Wednesday pay a landmark visit to the ghost village of Oradour-sur-Glane where 642 people were massacred by Nazi troops during World War II.

Gauck is the first German leader to visit the site in west-central France, where ruins from the war have been preserved as a memorial to the dead.

"I want to reach out to the victims and tell them: I am at your side," Gauck told Europe 1 radio ahead of the visit.

"I am 73 years old, I was born during the war, I was steeped in the discussion of our guilt… I will tell the victims and their families: We know what was done."

At a joint press conference on Tuesday, ahead of the visit, Hollande praised Gauck's visit as a symbol of Franco-German reconciliation.

"You have made the choice [to visit the site], it honours you, and at the same time it forces us, once the past has been acknowledged, to go boldly into preparing the future," Hollande said.

Gauck said he had accepted the invitation to visit the site with "a mixture of gratitude and humility".

He said he would not shy away from pointing out to others during the visit that "the Germany that I have the honour of representing is a different Germany from the one that haunts their memories".

The ruins they will visit include a church where women and children were locked in, before toxic gas was released and the building set on fire.

Some 205 children aged under 15 were among victims of the June 10th, 1944 atrocity which left deep scars in France.

After the war, French General Charles de Gaulle, who later became president, decided that the village should not be rebuilt but remain a memorial to the barbarity of Nazi occupation.

A new village was built nearby. In 1999, French president Jacques Chirac dedicated a memorial museum which includes items recovered from what became known as the 'Village of Martyrs'.

The Battle of Verdun (February-December 1916) claimed the lives of more than 700,000 soldiers and came to symbolise the horror of war for both the Germans and the French.

Hollande and Gauck will make speeches and visit the village square, where the residents were rounded up by German troops ostensibly to have their identity papers checked. The women and children were then locked up in the church while the men were taken to a barn where machine guns awaited.

They will be accompanied by two of the three living survivors, including Robert Hebras, 88.

Hebras, who was 19 at the time of the massacre, survived as he was buried under the corpses of others who were machine-gunned.

"I was consumed by hatred and vengeance for a long time," he said, adding that Gauck's visit came at an opportune time.

"Any earlier would have been too soon," he said, adding: "We must reconcile with the Germans."

The suspects, aged 18 and 19 at the time, allegedly ordered the inhabitants to assemble in the village square.

Prosecutors eventually identified 12 members of the regiment who were still alive after trawling through files of the Stasi secret police in the former communist East that came to light after German reunification in 1990.

A case has been opened against seven of them. The other five have already served sentences in France.

Gauck, a former East German human rights activist, has already paid two visits to the sites of Nazi mass killings in Europe; the Czech village of Lidice near Prague in 2012 and the Italian hamlet of Sant'Anna di Stazzema in March this year.