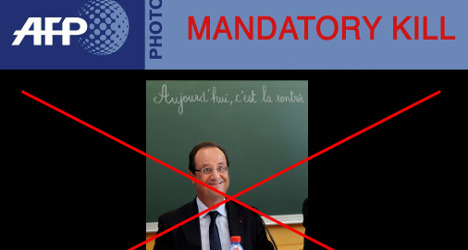 Screengrab from AFP of the "mandatory kill" notice placed on the unflattering photo of Hollande.

France’s president is photographed hundreds of times each week, so it’s natural that one or two snaps might end up being slightly unflattering.

But this week AFP, which supplies photos to media organisations around the world, took the step of pulling an image of Hollande, that perhaps wasn’t becoming of a head of state.

During a trip to a school in Denain, northern France, to mark the new term, Hollande was snapped by the AFP photographer, bearing a huge grin on his face, with big wide open eyes (see below), as though he was pulling a funny face to make the pupils laugh.

IN PICTURES: Spanish priest has France laughing with uncanny resemblance to Hollande

The Photo was captioned: "During a visit to the school Denain Michelet, September 3, 2013, Francois Hollande smiles, chairing a panel discussion on the reform of school timetables established by the government."

AFP put the image on their website to be downloaded before later deciding to issue a “mandatory kill” notice, meaning the photo was not to be used.

However, as is the norm these days, the photograph could not remain hidden for long and was soon being passed around on various social media sites like Twitter.

Contacted by French media site 20 Minutes, AFP insisted their decision to ‘kill’ the photo was an editorial one and that they did not come under any pressure to do so by the Elysée Palace. Writing on AFP's blog 'Correspondent' the agency's global news director Philippe Massonet said the decision to take down the photo was "clearly an error".

"The editorial decision to retract the photo – while it seemed sound at the time – created more problems than it solved.

"In trying to “kill” the photo after it had already been transmitted, we actually drew more attention to it and fueled the suspicion that AFP had bowed to political pressure, thus causing some people to call into question the

"The order to kill the photo ironically breathed new life into this saga, and led to the image being massively shared across social networks in France, often accompanied by unkind comments about AFP."