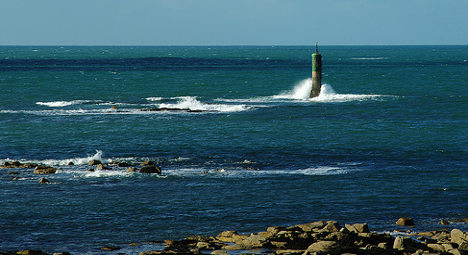 The boat, named Fromveur II, which serves the mainland and the islands off the western coast of Finistère ran aground on Tuesday morning with 365 passengers on board.

According to reports the boat hit rocks near Trois Pierres, less than a kilometre north of the island of Molène, in dense fog.

“We could hardly see 20 metres in front of us,” said Jean-François Rocher, who is mayor of Molène and owner of a lifeboat.

Passenger Anne-Marie Cluett from Guernsey told AFP: “We just heard a crunch. They tried to get the boat off the rocks but the sea had dropped. It was impossible.

“Some passengers began to panic and the crew tried to reassure them. We were afraid the boat would roll over, but fortunately it remained upright.

“We were told to put on life jackets. It was scary. It seemed a long time before the arrival of the first rescue boats,” Cluett added.

In the dense fog there was confusion around what had actually happened with some passengers believing they had simply docked at the port.

One passing named Marianne knew exactly what had occurred. “We knew we were far from the port, and knew straight away that we had run aground.”

According to photos the ship appears to have strayed too far to the left as it made its way up a narrow channel.

Rescue helicopters were immediately sent to the scene, but the ship was stable enough for passengers to be evacuated into other life boats to be taken to the shore.