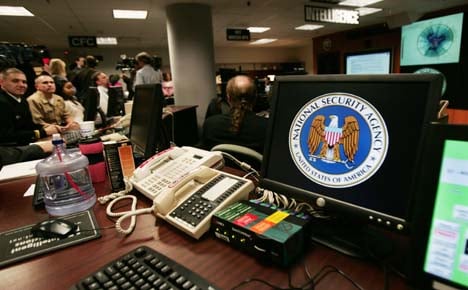 Der Spiegel reported that in 2010 the NSA monitored the internal computer network of France's diplomats and that of the ministry itself by accessing so-called virtual private networks (VPN), a tool that generally offers a secure internet connection to users.

The "top secret" NSA document seen by the magazine and dated June 2010 said French diplomatic offices in New York and Washington had bugs installed on the premises and that screenshots were taken from computer monitors in United Nations offices.

The NSA was "interested in (France's) foreign policy objectives, especially the weapons trade, and economic stability," the magazine said.

Der Spiegel had already revealed the NSA monitored internal UN computer systems in the summer of 2012 after viewing classified documents via Edward Snowden, the former intelligence analyst turned leaker to the media.

Sunday's revelations are also believed to originate from Snowden.

Qatari-funded broadcaster Al-Jazeera was another NSA target, the magazine said, with its internal communications system successfully hacked due to its
"high potential as sources of intelligence," according to a March 2006 NSA document seen by Der Spiegel.

The magazine said NSA spied on the channel because it "has been broadcasting audio and video messages from al-Qaida leaders for more than a decade," with special access to high-level members of the terrorist network of great interest to the United States.

The encrypted information was referred for further analysis, the agency's document said, which did not reveal if the NSA agency spied on journalists or
if surveillance was ongoing.

French prosecutors are already investigating alleged US spying under the PRISM surveillance programme, the existence of which was reported in June.

PRISM is said to give the US National Security Agency and FBI easy access to the systems of nine of the world's top Internet companies including Google, Facebook, Microsoft, Apple, Yahoo and Skype.