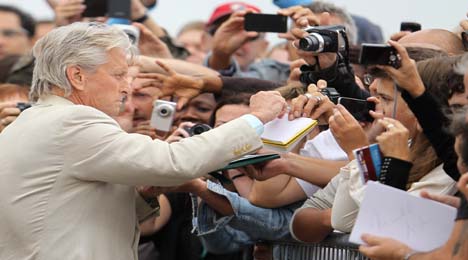 Douglas, who was accompanied by the film's director Steven Soderbergh, said; "Liberace was bigger than Elvis. Lady Gaga and Elton John learnt from him."

It was the fourth time Douglas had attended the festival, which celebrates American movies, and it is where he first met his wife Catherine Zeta Jones.

"This is the greatest gift France can give after the Statue of Liberty," he said.

Soderbergh, wearing a purple floral tie, said on the red carpet that he planned to make more television. The Liberace movie, a biopic of the entertainer who died of Aids in 1987, was made for television in the United States.

"I will do more TV, there is more freedom," he said.

"Cinema is part of the French DNA and the American DNA, more than anywhere else in the world. They were born together, which is why I love coming to Deauville."

Other stars who will attend the festival include John Travolta, Nicolas Cage and Cate Blanchett.

In all, 14 films are vying for the festival's Grand Prize, presided over by French actor Vincent Lindon, which will be announced on September 7.

Lindon said on Friday that he was "overjoyed to be here" and praised the career of Douglas, "the bravest man in Hollywood".

"My Life with Liberace", which also stars Matt Damon, goes on general release across France on September 18.

Douglas plays the role of the celebrated kitsch pianist and Damon plays his young lover. Soderbergh and Douglas will give a press conference on Saturday.

Included in this year's line-up are "Fruitvale Station" by director Ryan Coogler, which competed in the Cannes film festival after having won the grand prize at Sundance.

"All is Lost" starring Robert Redford will also compete.

Travolta will talk about "Killing Season", which he stars in with Robert De Niro, while Blanchett will attend to promote "Blue Jasmine", Woody Allen's latest.