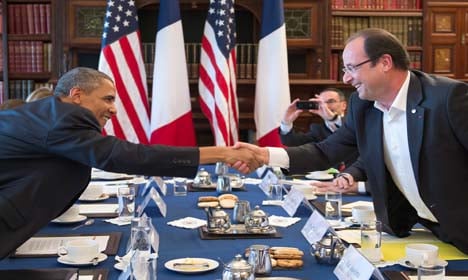 French President Francois Hollande has made clear his wish to take military action alongside the US against the Syrian regime, making Paris Washington's main ally in the Syria crisis after Britain backed out of any strikes.

In a 45-minute phone call with US President Barack Obama on Friday, Hollande said France was still determined to punish the Syrian regime, which Paris is convinced used chemical weapons against its own people last week, according to an aide to the French president.

Obama and Hollande "share the same certainty that the attack was chemical in nature and that the regime was undoubtedly responsible," the aide said.

With Britain sidelined from any Syria strikes by a shock vote against them in parliament Thursday, the United States and France find themselves in the position — unusual in recent years — of teaming up to lead a push for military intervention in the 29-month Syrian war.

The situation is a far cry from a decade back, when Franco-US ties hit a low over differences on Iraq and then-president Jacques Chirac's opposition to the Anglo-US offensive against Saddam Hussein's regime.

So deep was the animosity that French fries were renamed "freedom fries" in some American restaurants — including those serving the US House of Representatives office buildings — and anti-French hate messages were brandished in public, including on T-shirts and billboards.

In a dramatic reversal from the situation then, Hollande has given a shot in the arm to Washington's flagging efforts to form an international coalition for possible strikes on Syria.

"France wants firm and proportionate action against the Damascus regime," he said in an interview with Le Monde daily to be published Saturday.

Hollande, responding to a question, did not exclude the possibility of military strikes within days, even prior to an emergency session of the French parliament on Wednesday to debate the issue.

In his speech making the case for a military operation in Syria, US Secretary of State John Kerry on Friday praised France as Washington's "oldest ally" but made no mention of Britain.

A Franco-US offensive alliance would be "an unparallelled situation in contemporary times", said Bruno Tertrais from the Foundation of Strategic Research.

"We are in exactly the opposite situation to 2003," added Tertrais. "The United States does not need anybody militarily. But it is extremely important for them not to be alone politically."

Tertrais said Paris and Washington would try and rope in Arab countries "because both of them want to avoid giving the impression of a Western intervention in Syria."

"We cannot accept a world where women and children and innocent civilians are gassed on a terrible scale," he said.

Ruling out "boots on the ground" or a "long-term campaign", he said his administration was "looking at the possibility of a limited, narrow act."

His comments came after the United States released an intelligence report that found with "high confidence" that the regime had launched a chemical onslaught in the Damascus suburbs last week that killed 1,429 people, including at least 426 children.

Assad's government has denied using chemical weapons and points an accusing finger at the opposition.

If a Franco-American coalition does take shape, Paris is in a position to help with cruise missiles launched by fighter jets and with submarines.

But a French source said Paris would have to re-think logistical planning after Britain's refusal to take part in any offensive.