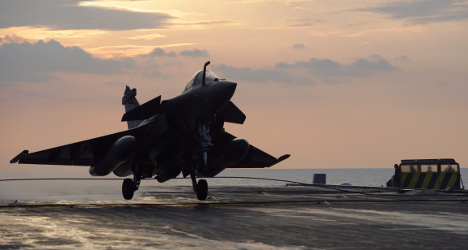 Survey results pubished on Thursday show the majority of French people do not support French military intervention in Syria.

On the same day France dispatched a ship towards Syria a survey conducted by IFOP for Le Figaro newspaper shows the French hold a mainly negative view towards a possible military intervention in Syria by the country's armed forces.

The poll revealed that 59% of the public are against French involvement. However the same survey found that 55% of the people questioned would, however, support UN military action against the Assad regime in response to a chemical weapons attack in Damascus last week that the West blames on the Syrian leader.

However, the French don’t have a history of being particularly pro-war. Only 55% were in favour of France’s involvement in Afghanistan and just 36% were for the military effort in Libya.

There was a more positive response towards operation “Serval” in Mali, for which 60% of the public showed their support, reports Le Figaro.

Earlier in the day the frigate Chevalier Paul left the port of Toulon in the south of France bound for Syria on Thursday, according to the French online news site Le Point.

The decision to dispatch the anti-aircraft vessel, comes just a day after it was announced that the French Parliament would hold an emergency session on Syria in response to the deadly chemical weapons attack, the West believes was carried out by Bashar al-Assad.

It is the latest move that suggests France is gearing up to intervene militarily in the war-torn country.

The anti-aircraft warship, believed to be the most modern in the French Navy fleet, could be used to protect allied bombers in the case the US, UK and France – the three countries pushing for military intervention – decide to launch air strikes against Assad.

French government spokeswoman Najat Vallaud-Belkacem said on Thursday that Western plans for retaliatory action against Syria for an alleged chemical weapons attack are "difficult to develop".

"The international community must find a riposte that is adapted to the situation,"  said on France 2 television.

She said it was "necessary to obtain the adhesion of several allies and partners at the heart of the UN Security Council, which we are trying to do" but added that "states like Russia and China pose a certain number of problems."

The aim of military action "will not simply be to punish the Syrian regime and prevent it from carrying out a new attack of this type … but also to seek a way out of this crisis."

"It's extremely important for the international community if it intervenes to do so in a manner that the country can recover."