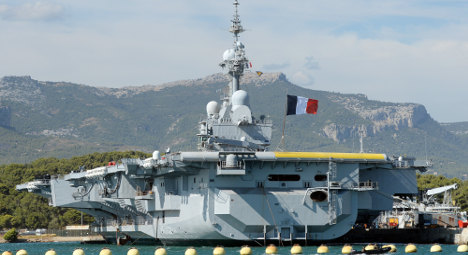 The frigate Chevalier Paul left the port of Toulon in the south of France bound for Syria on Thursday, according to the French online news site Le Point.

The decision to dispatch the anti-aircraft vessel, comes just a day after it was announced that the French Parliament would hold an emergency session on Syria in response to the deadly chemical weapons attack, the West believes was carried out by Bashar al-Assad.

It is the latest move that suggests France is gearing up to intervene militarily in the war-torn country.

The anti-aircraft warship, believed to be the most modern in the French Navy fleet, could be used to protect allied bombers in the case the US, UK and France – the three countries pushing for military intervention – decide to launch air strikes against Assad.

French government spokeswoman Najat Vallaud-Belkacem said on Thursday that Western plans for retaliatory action against Syria for an alleged chemical weapons attack are "difficult to develop".

"The international community must find a riposte that is adapted to the situation,"  said on France 2 television.

She said it was "necessary to obtain the adhesion of several allies and partners at the heart of the UN Security Council, which we are trying to do" but added that "states like Russia and China pose a certain number of problems."

The aim of military action "will not simply be to punish the Syrian regime and prevent it from carrying out a new attack of this type … but also to seek a way out of this crisis."

"It's extremely important for the international community if it intervenes to do so in a manner that the country can recover."

Speaking to the French press on Thursday the leader of Syria’s main opposition group Ahmad al Jarba, urged the West to take action to rid Syria of Assad.

Jarba told the daily Le Parisien he will tell French President FrancoisHollande in talks on Thursday morning: "Chemical Bashar has massacred our peopleon August 21. He must not escape the punishment he deserves."

The UN-Arab League special envoy for Syria, Lakhdar Brahimi, said Wednesday it was clear a chemical substance had been used in the August 21 attack in a Damascus suburb, killing hundreds of people.

"May he be attacked and may his regime disappear," said Jarba, branding Assad "an infection, a microbe for the region".

"This man and his family must be brought to justice in The Hague by the International Criminal Court."

The Syrian opposition expects Western countries to carry out "a punishing strike against the regime", followed by "political and military support for the Free Syrian Army", he added.

Assad has the support of Russia, Lebanon's Shiite militant group Hezbollah and Iran, he said, but added: "We are lacking everything. Our allies haven't given us anything we asked for."

Jarba also warned of Al-Qaeda's influence in the region.

"These extremists are manipulated by the regime to scare the world."

"A courageous decision must be taken. We need our friends. Words are not enough," he added.