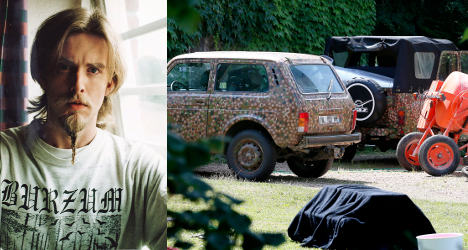 Kristian 'Varg' Vikernes, pictured in 1999 and Camouflaged vehicles outside his home in Corrèzes, central France. He was released on Thursday. Photos: AFP/Patrick Bernard

The charges were lodged in relation to posts Vikernes wrote on his blog.

The neo-Nazi, who left Norway in 2009 to settle in rural France with his wife and children has now been ordered to appear before a judge on October 17th, judicial sources told AFP on Wednesday.

The charges of “inciting racial hatred” and “glorifying war crimes” relate to blog posts which, according to prosecutors, were “anti-Semitic and xenophobic," as well as data retrieved from his computer, which had been confiscated by police.

Vikernes, whose nickname is “Varg” (wolf) made headlines across Europe in July when he was arrested on suspicion of plotting “a major terrorist attack” on French soil.

Authorities, who had been keeping him under surveillance, became alarmed when his wife purchased a number of rifles.

Vikernes was kept in custody for 48 hours while French police questioned him and his wife Marie Chachet as to why she, a licensed gun holder, had bought five weapons.

However, Interior Minister Manuel Valls later conceded no specific target or project had been identified, but authorities had decided to "act before and not afterwards."

He was released when the authorities could find no evidence to justify bringing charges against him.

Vikernes has himself vowed to sue French authorities for arresting him "for no good reason whatsoever, doing so in the most brutal way possible, with children present”.

He appealed for help on his blog for supporters to make financial donations to help pay for the legal fees.

In his blog, he complained that the authorities had not yet returned either his firearms or his ceremonial weaponry, including "decorative swords, [a] helmet, two spears, [his] wife’s flint knives, and all sorts of other things too, most of them with great affection value".

In May 1994, Vikernes was sentenced to 21 years in prison for murdering the guitarist of a rival metal band and setting fire to churches in Norway.

He moved to France upon his release in early 2009, where he settled with his wife and children.

He complained in his blog that his wife Marie had a "crime record as white as snow" and so should be permitted to own firearms.

"I have a record in Norway but I have never done anything criminal in France, and I can own weapons even in Norway if I want to," he added.