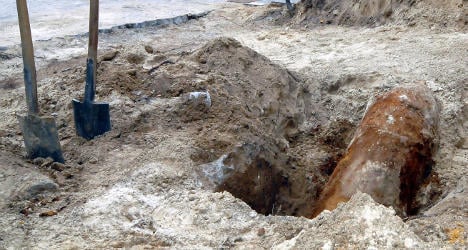 The 40-year-old man was on the ‘Grande conche’ beach at Royan, in the Charentes-Maritime region on Tuesday afternoon, when his children reported seeing something strange close to the water.

On investigating, the curious holiday-maker found what looked like a rusty tube covered in barnacles, but was in fact an undetonated phosphorous bomb from World War II.

He began handling the device, and to his shock it burst into flames, leaving him with light burns to his legs and lower abdomen.

At around 3.30 pm, beach security called in the emergency services and the bomb disposal squad from nearby La Rochelle, which neutralised the device.

A 50-metre safety perimeter was put in place, but lifted some three hours later.

“The victim was hospitalised and should be kept under observation until Thursday, in order to do some tests,” a representative from the local fire brigade told French TV TF1.

“Phosphorous can cause blood poisoning,” he added.

During World War II, Royan was at one time home to small pockets of German fighters, whose efforts attracted heavy bombing from Allied Forces.

This isn't the first time in recent memory that a World War II relic has caused panic in France.

In January 2012, authorities in the southern city of Marseille had to evacuate thousands of residents while disposing of an unexploded 250 kg US aircraft bomb dating from World War II.