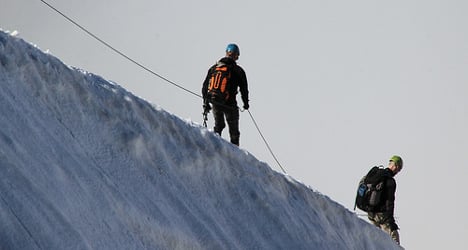 File photo of climbers on Mont Blanc in the Alps. Photo: Christian Bortes

The man was identified as a member of Britain's armed forces and was said to be climbing with a partner, although the two were not roped together, according to Italian news agency ANSA.

Police in Entreves, near the French border, said he began his climb on the French side of the 4,810-metre mountain, and fell on the Italian side.

A Spanish climber saw the fall and raised the alarm.

The victim's body was recovered by mountain rescue in Italy's Val d'Aosta region and taken to Courmayeur.

An investigation has been opened, said ANSA.

Wednesday's tragedy is far from the first to afflict climbers on Mont Blanc in recent months, nor the first fatality in the Alps to involve a British soldier.

In April, The Local reported how hikers in Les Deux Alpes discovered the body of 27-year-old Simon Daw, a member of 1st Battalion The Welsh.

The soldier, from Cardiff in Wales, had last been seen alive on the evening of February 13th.

Just two weeks ago, a 52-year-old British woman died after losing her footing and falling 100 metres on a high-altitude mountain pass near the Col de Vaurze in the Isère region of eastern France

Just hours before that, two Italian women were killed when an avalanche hit the Massif Mont Blanc.

Back in March, Briton Peter Saunders died, along with his 12-year-old son Charlie, while hiking, also on the Massif Mont Blanc.

The father and son had ventured into the sprawling Mont-Blanc range's Bossons area without adequate equipment, Patrice Ribes, from the gendarmerie in the nearby town of Chamonix, told AFP.

Britain's Foreign Office later issued a statement on behalf of the Saunders family.

"Charlie was always full of life, had a really happy temperament and loved spending time with his father," it said.

"Peter was fantastic at making things happen, resourceful, with a positive approach to life. They will both be sorely missed by friends and family alike.