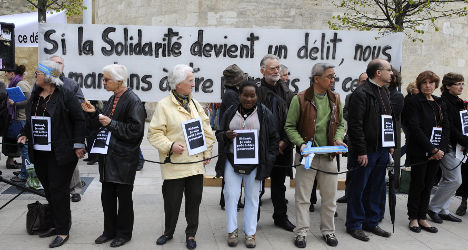 Supporters of immigrants to France protest a French law, carrying a banner saying "If solidarity becomes an offence, then we ask to be charged with that offence." Photo: Jean-Pierre Muller/AFP

Léopold Jacquens, who spends his retirement volunteering with the Red Cross in Le Havre, appeared before a court in the northern French city on Tuesday.

He is charged with making a false statement in support of a Congolese immigrant's application for a French visa in 2012.

The woman, said to have been homeless and seriously ill at the time, approached the Red Cross in the city, asking them to sign her application for a “carte de sejour.”

Before the administration of former French Prime Minister Jean-Pierre Raffarin, non-profit organizations such as the Red Cross were permitted to endorse immigration applications, but this is no longer the case.

Knowing that the Congolese woman needed an address to have her paperwork processed, Jacquens signed a document declaring that she shared his address.

“Since she didn’t know anyone, I gave her my address,” Jacquens told France Info radio.

Some months later, police verifying the claim arrived at his address and found the woman was not, in fact, a resident of the house.

Jacquens then refused to pay the €500 fine issued to him by local authorities, believing he was acting legally, after the repeal, in December 2012, of a controversial “délit de solidarité” law, which had made it an arrestable offence for charity workers and others to help illegal immigrants in even the most trivial ways.

In 2009, for example, a 59-year-old woman was charged under the law after simply allowing undocumented immigrants to charge their mobile phones at her home.

The law gained some international notoriety after the release of 'Welcome', a fictional film in which a French man is charged with aiding an illegal immigrant after teaching an Iraqi teenager to swim, a skill he uses to attempt to cross the English Channel to the UK.

Despite the demise of the law, and despite Jacquens’ plea that he had thought he was offering his address as a postal address, he risks up to a year in prison and a €15,000 fine.

His supporters have reacted angrily to the charges, claiming the court is attempting to intimidate ‘Good Samaritans’ who seek only to give the most basic care to marginalized migrants, who often don’t speak French or have an understanding of their rights.

“This community activist acted, obviously without compensation, out of a human concern, out of solidarity and necessity, in order to come to the aid of a person in distress,” a group of lawyers and human rights activists said in advance of the trial.

Here is the trailer for director Philippe Lioret's 'Welcome', courtesy of Palace Films