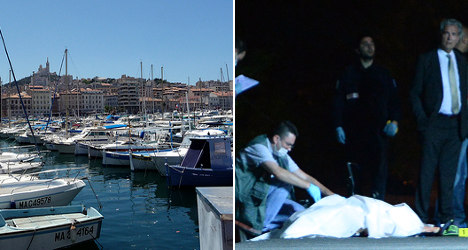 Marseille is a safe place for tourists despite the number of murders. Photos: Nouhailler/flickr / Anne Christine Poujoulat/AFP

Marseille has been hit by rampant gun violence in recent weeks and months but tourist chiefs insist visitors to the Phoenician City should not be scared away.

Speaking to The Local in the aftermath of the 13th fatal shooting attributed to Marseille’s drug trade, Maxim Tissot, the head of the city’s tourist board accepted the bloodshed, which also saw 18 similar murders last year, was not good for the city’s image. Despite the problems Tissot claimed tourist numbers were on the rise.

“There is no more of a problem with security in Marseille than in any other big city,” he said. “We are a big city, with one million inhabitants. The violence is not really an issue for tourists. Since the beginning of the year we have increased visitor numbers by 30 percent.”

That jump in numbers can almost certainly be put down to the fact that Marseille is currently enjoying the status of being Europe’s Capital of Culture for 2013.

The year-long celebration has however been overshadowed by the recent violence. Last week five government ministers raced down to the city, not to take part in any cultural event but to try to reassure residents they were taking security seriously and would act to end the shootings.

“Of course it is a shame we speak about violence instead of culture and tourist activities,” Tissot said. “Marseille is like Napoli or Liverpool. When something happens it’s all over the media.

“When tourists come to Marseille they do ask questions about where they should go and which parts of the city are dangerous, but it’s just the same when people go to Barcelona.

“The media speak about Marseille in negative terms but we’ve been trying to put out some positive news,” he added.

The good news story, according to Tissot, is the success of the cruise ship business which has seen around one million visitors disembark in Marseille this year.

“The cruise ship business increases 10 to 15 percent each year. Marseille is a relatively new city for tourism,” he said. “If there was a real problem for tourists they would stop the cruise ships from coming here.

“The fact the boats come here, shows we don’t have a problem with security,” he said.

Tissot knows the stakes are high. With the tourism industry worth around 15, 000 jobs and €700 million each year Marseille cannot afford to scare away visitors.

According to figures from the tourist office foreign tourists account for 62 percent of the visitors to the city, with Americans, Germans, British, Italians and Belgians topping the list of foreign visitors.

Despite claims from unhappy residents that both local authorities and the government have abandoned them, Tissot says measures have been taken to make the city safer for tourists.

“The mayor of the city has doubled the number of CCTV cameras in the city centre to 200. And the fact they are sending in more policemen is a good thing,” he said.

“Although I am not sure if it is enough because the problems are connected to drugs.”

Speaking to The Local last week socialogist Veronique le Goaziou, a specialist in crime in France's poor city suburbs, said police reinforcements were not enough to solve the city's problems and that old-fashioned bobbies on the beat were needed.

The real challenge for Tissot and his colleagues will be to maintain the bounce in tourist numbers once the Capital of Culture tag is taken down and placed elsewhere.

But he is hopeful.

"The economic benefits are rising each year, despite the crisis," he said.