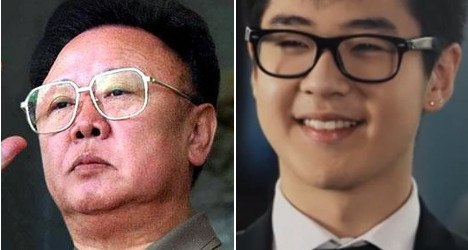 Kim Han-sol,18, grandson of late Kim Jong-Il and nephew of current leader of North Korea Kim Jong-un is to study political science from September at the Sciences-Po campus in the city of Le Havre, in northern France.

The teenager will join around 200 other students on the Europe-Asia programme, which is a three-year course that is taught mainly in English, university official Caroline Allain told AFP.

Kim Han-sol is the son of the disgraced Kim Jong-nam, the eldest son and original successor to the former dictator Kim Jong-il.

However Kim Jong-nam was unceremoniously removed from the line of succession because of his party antics and in particular his deportation from Japan in 2001 after reportedly entering the country using a fake Dominican Republic passport before being arrested during a visit to Disneyland.

With Sciences-Po renowned for its rigorous and intensive study programme, Kim Han-sol will have to knuckle down rather than follow in the wayward footsteps of his father.

Despite his family background, the young North-Korean who speaks perfect English and sports two piercings in one ear takes a particularly modern, westernized view of politics.

According to l’Express, during an interview on Finnish television in 2012, Kim Han-sol criticized North Korea's Pyongyang regime, saying he felt sorry for his compatriots being ruled by a “dictator” – his uncle.

His outspoken nature and modern views might well come from his time spent living in Macao in China,  as well as his former studies at an international school in Mostar, Bosnia-Herzegovina.

The news of his registration at the French university should please the French government who hope to attract more foreign students to French institutions.

The French government caused controversy earlier this year by passing a law that allowed for university courses to be taught entirely in English at public universities, a law that was hotly contested by the Académie Française, the institution responsible for safe-guarding the French language.

Universities like Sciences-Po known as the Grandes Ecoles, have for a long time taught courses in English to attract foreign students, despite it officially being against the law.

The university has been a breeding ground for French leaders with former presidents Nicolas Sarkozy, Jacques Chirac and François Mitterand among its alumni.

Here is the first part of the interview Kim Han-Sol conducted with Finnish journalist Elisabeth Rehn in 2012, courtesy of Processed Turkey.

And here is the second and concluding part.