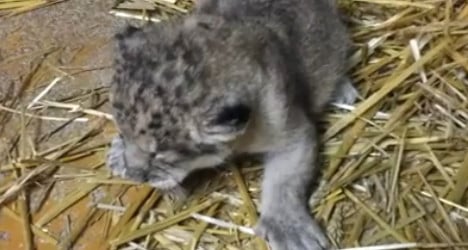 Just days after announcing the birth of the rare Asiatic lion cub officials at the zoo in French city of Besancon had to deliver the bad news on Tuesday that the animal had died.

“The death is not exceptional because in nature, less than one in two young cubs survive the crucial period of the first month,” read a statement from the zoo.

“The cub was found dead with his mother. According to the surveillance video, a progressive distancing from the mother finally led to the death of the cub, which was probably too weak,” the statement added.

According to the zoo, in abandoning the cub, the lioness will have the chance of giving birth to a stronger cub in a few months time.

The cub's death is a blow to the preservation of an animal of which only 350 remain in the wild.

Listed as endangered on the International Union for Conservation of Nature (IUCN) Red List, the Asiatic lion (panthera leo persica) was once widely distributed across southwest Asia but is now restricted to a single population in India's Gir Forest.

Around 100 of the lions are being kept in zoos across Europe.

Last Thursday The Local reported the zoo's joy in announcing the birth of the cub.

"It's a baby girl, she is in great shape. We are observing her in the big-cat house from a distance thanks to a system of cameras," Gerard Galliot, chief conservationist at the zoo at the Citadel of Besancon, told AFP at the time.

The cub was born on August 14 and weighed about 1.5 kilogrammes (3.3 pounds). If she had survived she was expected to reach a weight of 130 kilogrammes (285 pounds) within two years.

Her father Tejas, born at a zoo in the British city of Bristol, arrived in Besancon, in eastern France, in 2008, while her mother, Shiva, was born in Besancon in 2005.