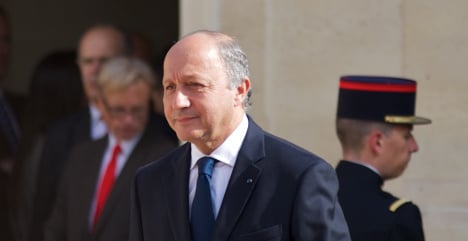 France's Foreign Minister Laurent Fabius calls for use of force if it is confirmed chemical weapons were used to massacre Syrians. File photo: Cyclotron/Wikimedia Commons

The West will decide in the coming days on a response to the Syria crisis after allegations the Damascus regime used chemical weapons in a deadly attack last week, France's foreign minister and president said on Monday.

Asked on French radio about a possible reaction with "force", Laurent Fabius said a decision had not yet been taken, adding: "We have to assess the reactions… and that will be decided upon in the coming days."

President François Hollande has also suggested France is not afraid to intervene in the war-torn country telling a French newspaper on Monday that he has told US President Barack Obama that he will be by his side if the West does decide to launch military action in Syria.

“There are several options on the table, from the strengthening of international sanctions to air strikes or the arming of rebels. It is still too early to say what will happen, everything will be decided this week," Hollande told Le Parisien.

“The UN experts will investigate. We will also give a little more time to the diplomatic process. But not too much. We cannot stand idly by over the use of chemical weapons," vowed the president.

France has seemingly made its mind up that Bashar al-Assad's forces were behind the chemical attack but the Syrian regime has angrily denied the claims, and has warned the United States of "failure" if it decides to attack the war-torn country.

Washington and its Western allies have pointed the finger of blame at Bashar al-Assad's regime, with Hollande saying "everything was consistent" with the conclusion that Damascus was behind the alleged attack.

"The options are open. The only option that I do not envisage is to do nothing," Fabius told Europe 1 radio.

He said the existence of a "chemical massacre" had been established and that Assad was responsible.

"A reaction is needed, that's where we are now… There is a duty to react," he added.

Recent comments by the White House and a US diplomatic offensive have fuelled speculation that the United States may be getting ready to order limited military action in Syria.

On Monday, UN experts were due to inspect the site of the alleged attack after being given the green light by the Syrian regime.