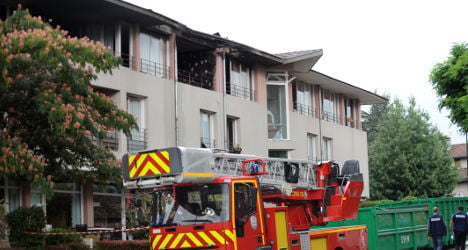 Firefighters on the scene at Les Solambres retirement home in La Terrasse, near Grenoble in southern France. The blaze claimed its fourth elderly victim on August 25th. Photo: Jean-Pierre-Clatot/AFP

The fire broke out on Friday in the southeastern town of La Terrasse, about 30 km from Grenoble, killing three others at the scene.

Prosecutors said on Saturday the fire at the Les Solambres residence, which housed 80 elderly residents, was "almost certainly" accidental and due to faulty electrical equipment.

Two women aged 96 and 100 died in the fire along with a 90-year-old man, and officials said on Sunday that a fourth victim, aged 76 years old, had died from his injuries.

Michele Delaunay, minister for the elderly, said on Saturday the home had adhered to all the required regulations and had the "usual number" of staff onsite when the fire broke out.

About 100 firefighters and police officers evacuated most of the residence which was being searched for possible other victims.

About 50 of the survivors were taken to a communal hall while the others who lived in a separate wing of the home were allowed to stay in their rooms.

The blaze is the worst in a French nursing home since 2011 when six people died and 13 others were injured in a similar incident in the southern port city of Marseille.

GRENOBLE
Grenoble: Is the ‘capital of the Alps’ the best French city to live in?
Url copied to clipboard!