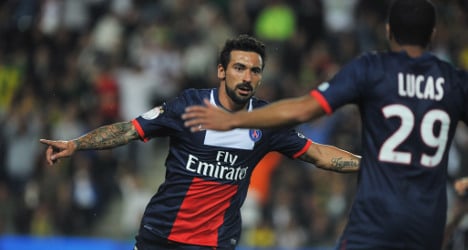 Lavezzi celebrates after scoring the winner for PSG against Nantes. Photo: Frank Perry/AFP

When Edinson Cavani gave PSG a 24th-minute lead, it looked set to be a long night for their hosts, but they held on and equalised eight minutes into the second half when a Jordan Veretout free-kick was turned into his own net by Alex at the back post.

However, Ezequiel Lavezzi got what proved to be the winner in the 74th minute, firing home the loose ball after a Lucas effort had been blocked on the line by Gabriel Cichero.

With his choice of a 4-4-2 formation coming in for some criticism after the defending champions were held by Montpellier and then Ajaccio in their opening two games, PSG coach Laurent Blanc opted for a three-man attack here, with

Lavezzi brought back in alongside Cavani and Zlatan Ibrahimovic.

"We could go back to the 4-4-2 but also (try out) other systems. We need to find a system which gives us balance," said Blanc.

"We have an attacking potential that many other clubs envy but we mustn't forget that to win a match we have to defend well."

Even against a five-man Nantes defence, PSG threatened to run riot in the early stages, with home goalkeeper Remy Riou racing off his line to deny Ibrahimovic before Cavani's first-time half-volley flashed just wide

midway through the first half.

Shortly after, Ibrahimovic and Cavani combined for the opening goal, with the latter racing on to the Swede's pass before firing low past Riou.

Yet the visitors could not build on that and only a fine Salvatore Sirigu save prevented Cichero from equalising for Nantes from an overhead kick justbefore the break.

The hosts did draw level soon after the restart when the unfortunate Alex, under pressure from Papy Djilobodji, saw a Jordan Veretout free-kick rebound off him and into the net at the back post.

Sirigu then had to save well to keep out a net-bound Alejandro Bedoya header, but PSG silenced the 37,000 crowd when Lavezzi scored what proved to be the winner.

Earlier on an attritional weekend in France's top flight, Nice were held to a goalless draw by Ajaccio in Corsica, while Saint-Etienne dropped their first points of the league campaign, going down 1-0 away to a young Lille side.

Salomon Kalou scored the only goal from the penalty spot to deny Les Verts the chance to move level at the top of the table with leaders Marseille.

"Saint-Etienne are a team who often pose us problems," acknowledged Kalou, mindful that it was they who pipped Lille to a European place at the end of last season, having also knocked them out of both domestic cup competitions.

Marseille end the weekend two points clear of Monaco at the summit after maintaining their perfect start to the season with a hard-fought 1-0 win at Valenciennes, Andre-Pierre Gignac netting a late winner.

Monaco drew 0-0 at home to Toulouse on Friday in a game played behind closed doors at the Stade Louis II as a punishment for crowd trouble at the end of last season.

Claudio Ranieri's side now travel to face Marseille in a top-of-the-table clash at the Stade Velodrome next Sunday.

In contrast to Marseille, Lyon's perfect start to the campaign was ended in a 1-0 home defeat to Reims, as Odair Fortes's deflected effort gave the visitors the points after Clement Grenier had missed a penalty for the hosts in a second half delayed for 35 minutes because of torrential rain at the Stade de Gerland.

That result came four days after Lyon's chances of making the Champions League group stage were severely compromised by a 2-0 home defeat to Real aSociedad in the first leg of their play-off.