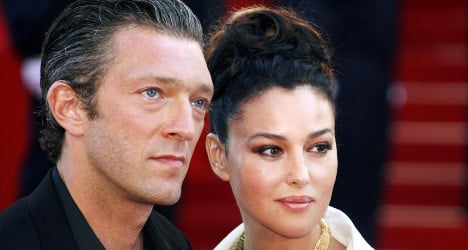 Monica Bellucci, 48, the former model who began an on-screen career in Bram Stoker’s “Dracula” in 1992 made an official announcement on Monday that the couple were separating after 14 years of marriage.

Vincent Cassel, 46, who shot to fame in 1990s French film “La Haine” about the disaffected youths of the Paris suburbs, followed Bellucci’s press announcement with a statement from his own press representative in France saying, the couple had split by "mutual agreement.”

Rumours had already been circulating about a possible break-up after French version of Closer magazine announced the split on the front page of their Friday edition.

The couple, who met on the set of Gilles Mimouni’s film "l’Appartement" in 1996, were together for three years before marrying in a discreet ceremony in Monaco.

They have two daughters together, Deva who is 7-years-old and Léonie, aged three.

The pair were known for leading particularly independent lives, spending much of their time apart and each keeping their own apartments in Paris and Rome.

“Marriage, we never know how long it will last… Today, it works, but in a year, I don’t know," Bellucci told Grazia magazine in April.

This is the second marriage to end in heartbreak for Bellucci who was married to Italian photographer Claudio Basso for four years, before divorcing him in 1994.

The actress is currently in Serbia working on her next film with Emir Kusturica.