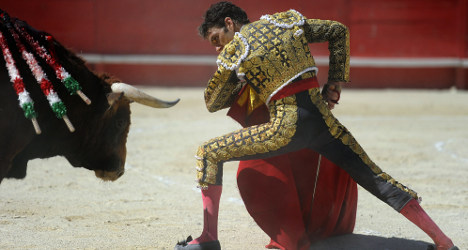 Is it time Photo: Pascal Guyot

It might come as a surprise to many that bullfighting, typically thought of as a Spanish tradition, is a practice that is celebrated and occurs quite commonly in the south and south west of France.

However, a protest by anti-animal cruelty activists in the south west region of Landes over the weekend, which turned violent and left one man in a coma (VIDEO), has brought the controversy over the “corrida”, as it’s known, back into the spotlight in France.

A 1951 law in France banned cruelty to animals, but allowed an exception for practices such as bullfighting and cockfighting, where towns can prove they have had a long and uninterrupted tradition of the activities.

The Local asks two opposing voices – one of the coordinators of Saturday's protest as well as the local official who organised the bullfight – whether the time had finally come for France to ban completely ban bullfighting, in all areas.

"YES" says Jean-Pierre Garrigues, Vice-President of CRAC Europe (The Radical Committee Against Corrida) and one of the organizers of Saturday’s protest.

“Bullfighting is no more than a cruel and violent practice, and it’s not true to say that it’s part of France’s heritage,’” says Garrigues.

“It’s not. It’s a Spanish tradition, and an evil one at that. And just because something is a tradition, that doesn’t make it acceptable.”

“The 1951 law protects bullfighting in the south and south west, and cockfighting in parts of the north of France,” he says.

“What that gives us is a situation where the exact same activity – massacring animals – will get you a two-year prison sentence in Paris or Clermont-Ferrand, for example, but is allowed and even celebrated in a place like Rion-des-Landes.”

“Furthermore, the reality is that the vast majority of French people would support a total ban on bullfighting,” he adds.

“There are only 5,000 to 10,000 people who attend bullfights in France, out of a population of 60 million. But the bullfighting lobby is extremely powerful, very active in the media, and has the support of plenty of judges and elected officials.”

Garrigues accuses Interior Minister Manuel Valls of using his power and position to suppress moves to ban bullfighting, because of his personal attachment to the practice.

Last September, Valls, who was born in Barcelona, said of bullfighting: “It’s something I love, it’s part of my family’s tradition. It’s a culture we have to preserve.”

He was speaking in the face of legislative proposals by Genevieve Gaillard, a deputy and Socialist Party colleague, to extend France’s ban on animal cruelty to include bullfighting.

“Valls is a bullfighting fanatic,” says Garrigues. “The way he wielded his influence to shut down the bill to ban it was completely scandalous and totally undemocratic,” he adds.

The tide, however, is now beginning to turn, according to Garrigues.

“The ultimate solution to this will be a change to the law. We know that,” he says.

“So we are getting support from more and more deputies and local politicians all the time. Now we have judges who are on our side, as well as the majority of the French people,” he concludes.

"NO" says Bernard Dehez, Deputy Mayor of Rion-des-Landes, an avid corrida fan, and one of the organizers of Saturday’s bullfight, which was disrupted by the protest.

Dehez tells The Local, in no uncertain terms, that anti-bullfighting protestors are no more than meddlers who should leave the people of his region alone.

“Bullfighting is recognized as a tradition – a national tradition,” says Dehez.

“First of all, it’s extremely important to the local economy here in Landes. We have huge bullfighting spectacles and big festivals centred around bullfights.”

“That attracts a lot of tourism and visitors to our town, and other towns like it, which obviously has great economics benefits for local people,” he adds.

In fact, Dehez has said the town would be pressing charges against Saturday's protestors for “offences against public order and destruction of property,” as well as “being a nuisance to our show, which led to financial losses.”

“It’s not just us in the south and south west who love bullfighting. We have people who come from all over the country, from Paris and other big cities, just to see a bullfighting spectacle.”

“So quite frankly, these outsiders who come into our region to protest against bullfighting, which is perfectly legal – I wish they’d just leave us in peace.”

“I’m sick of these external forces, interfering in our traditions and trying to dictate to us how to do things,” he concludes.

Now that you've read these two opinions, share your own and make yourself heard in the comments section below.