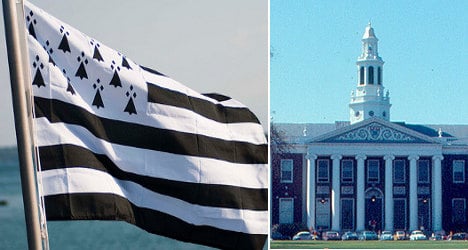 Breton to be taught at Harvard. Photos: Audrey_AK/Roger 4336 (flickr)

"Will the next president of the United States of America be fluent in Breton?" was the question asked by a French newspaper at the weekend after it was announced that Harvard University would soon be offering courses in the Celtic language of Breton.

Breton, the regional language of Brittany in the North West of France, may be struggling to survive in France but attempts to keep it alive have been goven a welcome boost from across the Pond.

The agreement, announced on Saturday between the Department of Breton and Celtic Studies at Rennes 2 University and the Department of Celtic languages and literature at Harvard, intends to offer “crash course” sessions in Breton to both masters and PHD students.

Rennes 2 said that the goal of the course is “to enrich the study of languages, literature and culture amongst masters and doctoral students” whilst they also hope to “strengthen collaboration between the research departments of both universities.”

"Breton has socio-linguistic importance which makes it a relevant language to teach today," Hervé Le Bihan, director of the department of Celtic and Breton languages at Rennes 2 told The Local.

Yann Bevant, a researcher at the Centre of Breton and Celtic Research (CRBC), explained that the course “envisages regular seminars in Breton studies organised by Rennes 2” for Harvard students.

He added, “In concrete terms, Breton will be taught at Harvard in ‘crash course’ sessions” and “exchanges between students and professors will be organised.”

The Breton language comes from the British Isles where it shares linguistic roots with the Celtic languages spoken in Cornwall, Wales, Scotland and Ireland.

But like the Celtic languages across the English Channel, Breton is struggling to survive. According to a TMO-Régions survey in 2009, less than 200,000 people speak it in France. Between 1997 and 2007 the number of Breton speakers went down by 30% whilst the majority of them are aged over 60.

The agreement between Harvard and Rennes was only signed in June but the project's roots go back to 2010 when the CRBC began organising conferences in the Breton language at the Massachussetts college.

Harvard, a private university, is the oldest higher education institution in the United States and along with Yale it is one of the most prestigious in America.

The famous college, situated in Cambridge, is one of the few colleges in America to have a Celtic languages department.