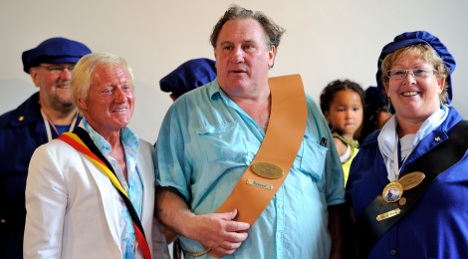 "I think he's a very open person, who likes people, who likes to party and also to make contact with the locals," said a guest who gave her name only as Anne.

The 64-year-old bon vivant, star of dozens of films including "Cyrano de Bergerac", threw the party for some 200 people, including his new neighbours, in the grounds of the 19th-century white-brick five-bedroomed home that he bought last year.

"The residents greet me with smiles and 'I love yous'," Depardieu said. "There's no need for pretence, or to hide, or to be a star with all the bodyguards. That's why I invited them."

Earlier Saturday, the municipality of Estaimpuis, which includes Nechin, made its most famous resident an honorary citizen.

"We are pleased that you have made Nechin your home," mayor Daniel Senesael said at the ceremony at a 12th-century chateau surrounded by a moat. "Gerard, Estaimpuis loves you," he added.

Depardieu told journalists outside the chateau that life in Nechin was "perfect".

"I have worked around the world but I settled in Nechin," he said, describing himself as a "citizen of the world".

Senesael recalled: "When he came to set up house here, he always told me that he wanted to do something nice with the neighbours. He kept his word. He bought his house, the neighbours were invited… and so I think it's great when you keep your promises… and you can mingle with Depardieu, what more do you want?"

Local butcher Marc Vens, who catered the party, told Belgian TV that T-bone steaks and suckling pig were on the menu.

Around a quarter of the residents of Nechin are French and many are wealthy, attracted to the spot by Belgium's less onerous tax laws.

Depardieu stirred up controversy when he decided to take up residency across the border after the Socialist government sought to impose a 75 percent tax rate on annual incomes over €1 million ($1.3 million).

In January, Depardieu was granted Russian citizenship by President Vladimir Putin. The move was criticised, as were his friendships with Putin and Chechnya's strongman leader Ramzan Kadyrov.

The veteran actor told France's Figaro magazine on Friday that the controversy had been "a big misunderstanding" and that he still loved France.

"I am a free man. I feel at home everywhere in Europe."

"This whole story is a big misunderstanding," he said, adding: "I love France as much as ever. It's my country."

Hailed as one of the greatest actors of his generation, Depardieu also owns a number of businesses including vineyards.

But in recent years the portly actor has also become known for his off-screen antics.

He landed a fine earlier this year for drink-driving and in 2011 generated global headlines when he tried to urinate in a bottle aboard a plane as it prepared to take off from Paris for Dublin.