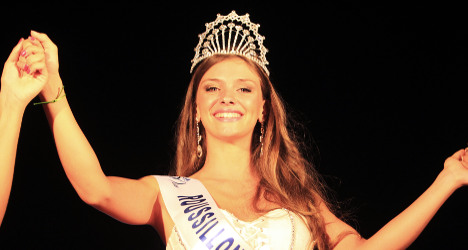 Norma Julia reacts after being elected Miss Roussillon 2013 during a beauty contest on August 11. She has since been stripped of the crown. Photo: Raymond Roig/AFP

Rules are rules when it comes to the Miss France beauty contest it seems, and contestants taking their clothes off is a clear breach of the laws.

Earlier this month Norma Julia was crowned Miss Roussillon in a contest that was given added media attention after the sinister disappearance of one of the favourites just weeks earlier.

With contestant Allison Benitez, 19 and her mother Marie-Josée missing, France’s media descended on Roussillon, south west France, to cover a competition that had suddenly been thrust into the spotlight.

Thanks to extra press attention winner Norma Julia’s face was plastered all over newspapers and websites across France.

After her triumph Julia was set to go on and represent Roussillon in the nationwide Miss France competition later this year, but sadly that will not happen after organizers found she had broken the rules.

Julia was discovered to have taken part in a photo shoot in scantily clad underwear. It is not clear how Miss France chiefs came across the images, but they were not taken lightly.

Julia is not the first Miss France contestant to fall foul of the rules in this manner. Valerie Begue, Miss France 2008, also lost her title after the publication of suggestive photos in Interview magazine.

And in 2011, Laury Thilleman, the then Miss France champion, was also dethroned after a similar semi-naked photo shoot for Paris Match magazine.

This year’s Miss Corsica has also been barred from taking part in Miss France for taking too many of her clothes off for photographers.

Julia’s loss however is someone else’s gain and 20-year-old Sabine Banet, who finished runner-up in the Miss Roussillon contest will now go on and represent the area in December’s Miss France contest.

Meanwhile police continue to search for Allison and Marie-Josée, who have not been seen or heard from since July 14. Weeks after their disappearance Allison's father Francisco Benitez, a member of the French Foreign Legion, hanged himself at his barracks.

Despite leaving a note claiming he has had nothing to do with their disappearance, suspicions have grown that Francisco Benitez may have been involved.

The suspicions grew when it emerged a former mistress disappeared in similar circumstances years earlier.

French police have opened an official criminal investigation into both incidents. Don't want to miss a story about France? Follow us on our Facebook page by clicking HERE.