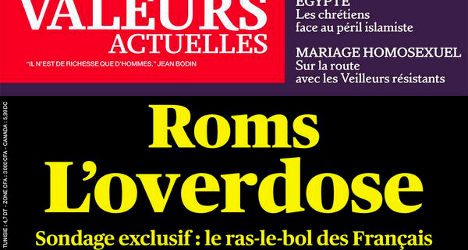 Weekly magazine “Valeurs Actuelles” (current values) was accused of inciting violence on Thursday over its latest edition, whose cover story was accompanied by the provocative headline “Roma overdose”.

The front page carried the picture of a sign with a caravan and a red line through it as well as the subheadings “handouts, crime, the things we don’t have the right to talk about”.

The magazine’s lead article contains a feature on the “criminality” and “incivility” of certain Roma people in the Loire-Atlantique region as well as the results of a survey carried out by polling agency Harris Interactive which sampled the views of French people towards its Roma communities.

The results of the survey revealed that 70 percent of French people are concerned about the presence of the Roma people in France.

As well as provoking outrage on Twitter the magazine’s choice of front cover and subject matter has angered France’s ruling Socialist party.

“The front cover of Valeurs Actuelles is outrageous, anti-republican and it incites xenophobic violence against a minority of the population,” the party said in a statement.

“These sickening values that are conveyed have nothing to do with current feeling, they are anti-republican.

“This is a demonstration of an intolerant and intolerable political campaign. We have warned against the trivialisation of such campaigns and ideas, which the Socialist Party are fighting against.

The magazine’s chief however  has defended its choice of cover and coverage and threatened legal action against the Socialist Party over its “unfounded defamatory attack”.

“The issue is aimed at looking at a deep problem which the government has shown it is incapable of dealing with,” said the magazine’s director general Yves de Kerdel.

“It is not aimed at stigmatizing a population that suffers from the incompetence of politicians.”

Thursday’s controversial front cover is just the latest in a lengthening line of shocking incidents in France concerning the Roma and traveller community.

Earlier this month The Local reported how aRoma rights group based in southern France filed a police complaint this week against a Facebook page entitled “Adopt a Gypsy,” for what it called the “flood of hatred” brought on by the page on the social networking site.

Days earleir a French mayor had taken the extraordinary step of threatening to kill himself if a group of travellers returned to his tiny village.

The 85-year-old right-wing firebrand made comments in Nice on July 4th where helabelled the local Roma community a “smelly” and “rash-inducing” presence in the southern city.

France has previous been criticised by the European Union for its policy of deporting Roma people. Despite president François Hollande promising to find a solution to the issue the number of deportations and camp closures have increased under the socialist government.