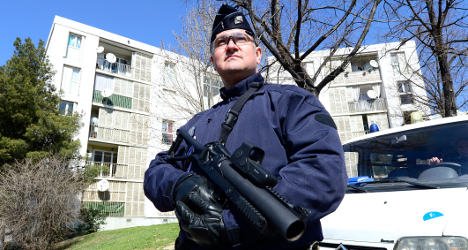 A police officer in Marseille, but not a bobby on the beat. Photo: Boris Horvat/AFP

There was a feeling of deja-vu in Marseille this week.

After news that another man had been murdered on the city’s streets – the 13th deadly “score settling” over drugs so far this year – five government ministers including the PM Jean-Marc Ayrault rushed to Marseille, pledging to take swift action to end the violence.

The scene was all too familiar for the inhabitants of a city, plagued by drug gangs and the related crime and violence, as was the subsequent blame game between local politicians and ministers from Paris over who was responsible for failing to put an end to the ongoing bloodshed.

As an immediate response France’s Interior Minister Manuel Valls ordered an extra unit of CRS riot police  – around 80 officers – to be stationed in Marseille as well as promising 24 detectives, specialists in investigating drug trafficking ,would be put at the service of the city’s police force.

The announcement was deemed insufficient, however, by the police union Alliance and socialist Senator Samia Ghali, who demanded "concrete measures" to deal with a situation that "unfortunately has not changed much."

For French sociologist and author, Veronique le Goaziou, a specialist in crime and violence in France's cities, Valls’s measures were also misguided. What is really needed she says, is more old fashioned bobbies on the beat, or community police officers as they are more commonly known.

“The number of murders in Marseille this year is nothing new,” Le Goaziou tells The Local. “And it's not the first time ministers have gone to the city promising to make things better but they have not managed to stop this phenomenon.

“They have failed to understand the cause and the context of the violence. Marseille is a port and has links to North Africa and Morocco, the source of most of the hashish that comes into Europe. The city also has very poor suburbs where many young people are involved in minor crime. This all means it will be a difficult task to fight trafficking.

“It’s true that more police are needed but not the type they are sending in. The CRS are there to keep order and that’s what they will do, they react to a problem,  but Marseille, like the rest of France needs community police officers.

“We are perhaps the only country in Europe that don’t have these kind of “bobbies on the beat”. They know the people, the area and the daily life of residents. This can help break these drug trafficking networks.

“The police in France often act more like cowboys and sheriffs, but we don’t need this. In France there is a view among the police that working on the ground, walking around the streets is a punishment.

“Officers like to make arrests and obviously we need that but in other EU countries they also have these police officers that are there on a daily basis in communities.”

Le Goaziou said one of the reasons why French governments have been averse to introducing more community police officers is that crime rates immediately go up, which makes politicians twitchy.

“It’s normal that crime rates go up because the police officers on the streets will stop and report more crimes,” she said. “But the figures are very politicised in France and they are a very sensitive issue. Politicians know the French population are very sensitive to the question of security.

Le Goaziou says the longer France’s goes without introducing community police officers the harder it becomes to take that step.

The sociologist also says there is a need to invest in the poor suburbs of Marseille in order to try and keep young people away from the temptation of the drug trade.

“If a young person from Marseille does not succeed at school it is very difficult for them not to end up selling drugs, because often that’s the only alternative for them,” she said. “This problem is endemic. Selling drugs is like a job for these young people. Schools sould not be allowed to expel pupils."

Le Goaziou also suggests the widespread support for the far right National Front party in the south of France causes panic among centre left and centre right politicians, pushing them to act before taking the time to reflect on the problem.

The government's decision to send in the CRS is just one example of politicians acting without thinking, she says.

Nevertheless promises of reinforcements continue to be made.

Until the French government thinks more about what kind of reinforcements Marseille needs, nothing is likely to change, Le Goaziou says.

“The people of Marseille can’t take anymore. They are exasperated,” she said. “They want more police, but they want ones who will talk to them and listen.”