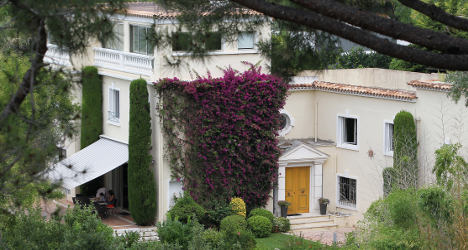 Nestled on a hillside overlooking the Mediterranean, the six-bedroom villa was once managed by close associates of Bo, including British murder victim Neil Heywood, French court documents obtained by AFP show.

According to French court filings seen by AFP, the villa in Cannes, near Nice, is owned by a French-registered company called Residences Fontaine Saint Georges, founded in 2001.

Shide Group chairman Xu Ming testified in court that Bo's wife Gu Kailai told him in 2000 that she wanted to buy a villa in France and Xu provided $3.23 million.

Prosecutors said they had evidence to show Bo was present when Gu showed the businessman pictures of the villa and the politician knew he was buying it for her.

In later years, Xu repeatedly discussed with Gu nominees to own the Fontaine Saint Georges property on her behalf, the prosecution said, according to transcripts of the proceedings released by the court.

Neither Bo nor his family appear on official French records as owners of the property.

Bo told the court: "I was completely unaware of the Nice property and the whole process was made up."

The politician was one of China's highest-flying Communist Party members until his downfall last year following Heywood's death, for which Gu was later convicted.

He faces charges of bribery totalling $3.6 million, embezzlement and abuse of power.

The Cannes property stands on the winding Boulevard des Pins, in a suburb favoured by wealthy foreigners, according to property agents who specialise in high net worth clients.

"It's a quiet boulevard with views of the sea and numerous villas that are owned by emirs and international companies," Patrick Montavon of property firm Agence de la Californie told AFP. "It's next to billionaires' row."

Despite its neoclassical entrance, colonnaded balconies and shaded terrace with accompanying pool, the villa itself appears modest compared to its nearest neighbours, many of which sell for upwards of €50 million ($67 million).

The case has cast a spotlight on how disconnected many of China's Communist party leaders are from ordinary citizens, squirrelling fortunes away in overseas investments and sending their children abroad to study.

Bo's family is said to have amassed immense wealth, owning property in France, Britain and the United States.

The first manager was Patrick Devillers, a French architect who maintained a business relationship with both Bo and Gu forged when the politician ran the industrial port town of Dalian.

Devillers was detained in June 2012 at his home in Cambodia at Beijing's request and spent several weeks in custody in China before being released.

The second manager of the luxury villa was Neil Heywood, another friend and business partner of Bo and Gu before their relationship deteriorated.

Heywood was found dead in November 2011 and Gu Kailai was convicted last year of poisoning him after a business deal went sour.

Court filings say the company made the change because of "very significant difficulties" as Heywood was based far away, and thanked him for his service.