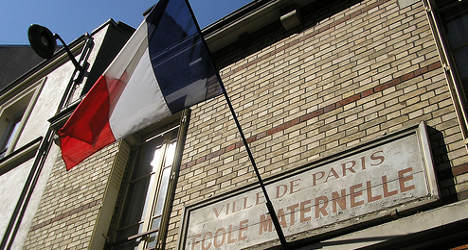 “They are currently undertaking a comparative study of French and British primary education and the French come out so much better,” the presenter told the Radio Times magazine.

“French schoolchildren, if you see them, are so much more well-behaved and engaged in what they are doing and concentrating… I think generally speaking, demonstrably a better educated race,” he said.

Fry’s is not alone in having this opinion, with many envious British and Americans having voiced similar views over the years.

But is the French education system that good? The Local asks three people in the know, including the president of France’s biggest teaching union to offer their views. They make for interesting reading.

“French schools have enjoyed success over the last thirty years with the average ability of pupils rising. Their skills have risen in certain areas like technology, but at the same our education system has real problems.

“Too many pupils are failing at school. Around 20 percent of students aged 11 are failing and we need to progress to reduce that number.

“The unions are battling for the government to make primary education a priority because for a long time our country has under-invested in primary schools.

“A recent study showed that France invested on average 15 percent less per student, per year in primary schools that other countries in the OECD.

“Studies that compare different countries' education systems show our schools have weaknesses. For example they put a lot of students under stress. One study revealed that 15-year-olds in France are the least likely to answer questions because they are too scared to get the answer wrong.

"The way French pupils are marked needs to be looked at "

“Their stress is only increased in a time of economic crisis because a young person’s entire future in France can hinge on them getting a good results in school.

“For a long time we have needed to reflect on the wellbeing of our children in schools and the atmosphere in which they learn. Today this question is being debated more and more.

“We also need to look at the way are children are marked from such a young age as well as the training of teachers. Now is the time to reflect on these things and make sure our schools offer the best conditions for pupils to learn in.

“Perhaps one area where the British look up to the French is the “ecoles maternelles” (nursery  schools), where we educate children from three years of age. These play a really important role in our education system.

“We don’t agree with the British system of having competition between schools and publishing results in league tables. All schools need to be equal and offer the same standard of education and the same teaching.

Author Peter Gumbel, who wrote the book "On achève bien les écoliers", an examination of the French school system:

"Stephen Fry’s remarks about French schoolchildren being “so much more well-behaved and engaged in what they are doing and concentrating” is a charmingly romanticized vision of French education but one that doesn’t correspond to the much less charming reality.

"The French are simply not “a better-educated race.” In international comparative tests of pupils’ abilities, neither British nor French pupils rank very highly. In the most recent 2009 PISA tests, which tested 15-year-olds in more than 60 countries, the French on average scored slightly better than the British in reading comprehension and maths, but less well in science.

"It’s true that the best French school children must amass an impressive display of knowledge to pass the general baccalauréat school-leaving exam: it’s the equivalent of taking 5 or 6 A-Levels. But only one third of French pupils actually pass this exam. Another third takes a more skills-oriented “professional” or “technological” baccalauréat which doesn’t have anything like the same academic standard, and the other third either fails these school leaving exams or simply doesn’t take them.

"Almost 20% of French kids actually drop out of school with no qualifications, and their standard of literacy is very low, according to both French and international studies.

"Fry seems to be comparing apples and oranges. The best French pupils compare favorably with the best English ones, but are not substantially “better educated.” But there’s no evidence that the French as a whole are either better behaved or more engaged and concentrating. In fact, a recurring theme of the critics of French education is that the curriculum is dull and unengaging.

"Moreover, some schools, especially those in deprived areas, are hopeless cases. If Fry hasn’t yet seen it, he might want to watch the movie “La Journée de la Jupe” starring Isabelle Adjani, who struggles to control a rowdy classroom, and is only able to teach a lesson on Molière when she brandishes a gun she found in one of her students’ bags.

Piu Marie Eatwell author of "They Eat Horses Don't They – The Truth about the French":

“The French education system is a traditional old fashion system, rather like an English grammar school in the 1950s. This has both good and bad consequences.

“At primary level French pupils get a really good grounding of the three Rs (Reading, Writing and Arithmetic). All the kids can write fantastically well, and when I look at the writing ability of children of the same age in England, I am shocked.

“It’s the same in arithmetic, where the times tables are drummed into the children and they have to recite them again and again. This is a really good thing because kids need to learn to read and write.

“The downside is there is a lack of imagination and creativity. Pupils are not taught to question anything and this becomes more evident at secondary level. It’s not just about learning, school is about thinking of solutions to daily problems and that’s where the French system fails.

“In terms of discipline French schools are also like old fashioned grammar schools –  whether it’s making children stand in the corner or sit with their back to class or put them on detention. This might work at primary level but when they get older they rebel against this discipline.

“More French pupils smoke than in any other country and there are high levels of violence in French schools. There are however things that the British system can learn from the French system because it has almost gone too far in the UK.

“I remember being told not to correct my son’s spelling because that was imposing on them. It’s become ridiculous. The problem is we idealise the French system. There's no point just saying its wonderful, we need to look at it and say "What have they got right and what have they got wrong?"