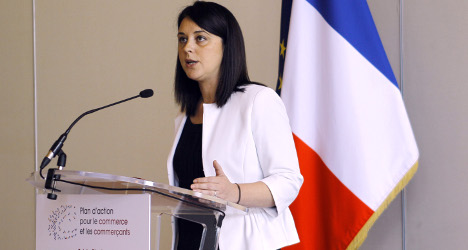 Underfire: Sylvia Pinel, who will present the contentious bill on auto-entrepreneurs to the French cabinet on Wednesday. Phot: Matthieu Rater/AFP

The much-maligned reform, only part of which is dedicated to auto-entrepreneurs, will be presented to the cabinet on Wednesday by Trades Minister Sylvia Pinel.

Pinel was tasked with coming up with changes to France's auto-entrepreneur scheme which, since it was set up in 2009, has allowed self-employed people an easy way to set up their own business.

The government wants to place limits on the status, which it believes puts regular tradespeople at a disadvantage.

Among the many changes mooted was a plan to place time limits on how long a self-employed worker could be registered as an auto-entrepreneur.

There was also talk of reducing the annual earning limits on auto-entrepreneurs, which meant those who surpassed them would have to give up the status and effectively set up their own limited company.

As The Local reported last week, however, it appears any mention of these limits were dropped from the final draft of the bill.

The apparent U-turn suggested the government had caved in to opposition.

According to French financial newspaper Les Echos, however, any mention of limits does not need to be included in the bill and can simply be added by decree at a later date.

“The fat that the threshholds are not addressed in the bill raises a lot of concern among the self-employed,” Ludovic Badeau from the Collective for the Defense of Auto-entrepreneurs told Europe1 radio.

“This may be a way for Sylvia Pinel to pass the bill in an easier way, with much less controversy. But just because these unacceptable limits are not included in the text of the bill, it is not possible to fool us auto-entrepreneurs. We remain cautious,” he added.

Since 2009, around one million people are believed to have signed up to the auto-entrepreneur status, launched by former president Nicolas Sarkozy.

It offers the self-employed an easy way to set up their own business and allows them to pay social charges as they earn, rather than up front.

In May, The Local reported how a group called “The Chicks” set up an online movement to fight the proposed reforms.

“We cannot and we must not accept the denial of social democracy that would lead to the destruction of our businesses, jobs and the growth of entrepreneurship in France,” read a statement on the website.

The apparent chopping and changing of the text of the bill has seen the government also come under fire from the tradespeople, whose interests the bill is supposed to favour.

"This text is a step forward. It is a step that needs to be thorough but it is very insufficient," said Alain J. Griset, president of the Permanent Assembly of Chambers of Trade.

Various reports have suggested there is no need to alter something that has proved to be a success for both individuals and the country as a whole.

In July, a study by global auditors firm RSM suggested that France was one the leading countries in business creation thanks to its auto-entrepreneurs.

And in April, a report by the General Inspectorate of Social Affairs and Finance concluded that the status does not clash with that of traditional trades people and that auto-entrepreneurs “take up niches that are neglected by other companies”.

The future of the popular scheme is now in the hands of ministers, and a parliamentary committee is to be set up to discuss the text that will eventually be put before parliament.

Auto-entrepreneurs will want to keep a close eye on events.