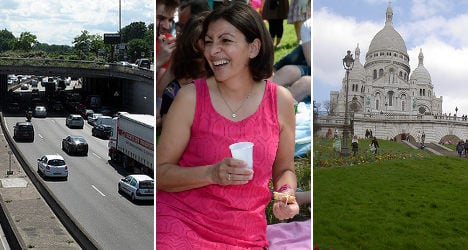 Politicians often like to come up with their own ideas for future proposals, but Anne Hidalgo, favourite to become the next mayor of Paris, turned to her supporters.

The current Socialist deputy mayor of Paris is set to publish online on Tuesday a book of 150 proposals that will form the basis of her election manifesto.

The ideas, some more wacky than others, have been garnered via a 'suggestion box' organised by Oser Paris (Paris Dares), an organisation made up of her supporters, which was set up in September 2012, when she announced her candidacy.

In all, over 900 suggestions were put forward, some slightly too far out to be included, and were whittled down to the 150 that have won Hidalgo's backing.

Next year’s municipal election in Paris looks set to be a hard-fought battle between Hidalgo, the favoured candidate of current Socialist Party mayor Bertrand Delanoë, and the UMP candidate Nathalie Kosciusko-Morizet.

The opening skirmishes have already been bruising, with the pair looking likely to square up in court at one stage.

With citizens of EU nations eligible to vote in next year’s French municipal elections, here’s a list of some of Hidalgo's principal ideas, and a few more bizarre ones that managed to make the cut, so you can decide for yourself whether she will get your vote, if you're eligible.

No to cable cars, but yes to toboggans

Perhaps unsurprisingly, the proposal to install a “cable car running between the major Paris rail stations, Gare d’Austerlitz, Gare de Lyon and Bercy,” was rejected, with Hidalgo perhaps realising the project may be slightly over-ambitious in a time of austerity.

However, a number of particularly imaginative ideas were left in.

On page 29, one suggestion is to transform Paris’ bridges to include small homes, whilst another suggests using the riverbanks as a solution for new and innovative student housing.

Not ideal for solving Paris’ congestion problems, but perfect for another suggestion for the development and use of rickshaws in the capital.

Some of the younger contributors offer the most imaginative ideas.

One inventive and perhaps popular suggestion that has been included in Hidalgo's book is the “creation of a network of tunnels under Paris to protect people from the cold”.

In the “Culture and sport” section, one particularly fun-loving child suggests opening toboggan runs in Montmartre.

The current deputy mayor wants to reduce the speed limit on the périphérique (the ring road around Paris) from 70 km/h to 50 km/h, as well as having a lane reserved for buses, taxis, electric vehicles and pooled cars.

She also hopes to extend to the tramway along the Maréchaux boulevards from Porte d’Asnières in the 17th to Boulevard Victor in the 15th.

Hidalgo has stated, “one of my goals is to raise the amount of social housing from 20% to 25% in Paris.”

Another goal is the creation of “Mutliloc,” an agency that would be used to encourage and help owners of vacant properties to put them up for sale.

The Socialist mayoral candidate wants to see a huge increase in the number of available crèche places, promising to create 5000 new ones.

If elected mayor of Paris, Hidalgo would create a new position called “Nightlife Coordinator,” who would manage all major Paris nocturnal festivals.

Further cultural plans would allow for charities to make use of school grounds after school hours.

Regarding the famous Paris Fashion Week, the mayoral candidate says she wants it to be “a major event that will involve all local stakeholders: artisans, fashion schools, tourism professionals," and so on.

Hidalgo intends to turn the Paris heliport in the 15th arrondissement into a green space which would see the extension of the Suzanne-Lenglen park.

One idea from Oser Paris that particularly pleased Hidalgo was the “creation of a healthcare centre for small woodland animals living in the woods surrounding Paris… in association with veterinary practices and specialist schools.”