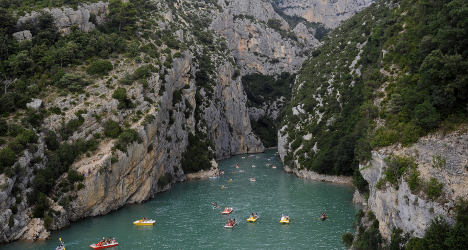 A view of the edge of the Sainte-Croix lake in southern France as it heads down into the Verdon gorge. Photo: Franck Pennant/AFP

The disappearance of a French holidaymakers at a popular tourist spot in the Verdon region of southern France sparked panic last week.

Police, helicopters and firefighters were all brought into action to hunt for two couples who had gone missing after hiring out a canoe on the Lac de Sainte-Croix. The discovery of their empty canoe had most fearing the worst.

After two days of fruitless searching rescuers were losing hope, but it then turned out the two couples were at home all along. They revealed they had simply dumped their canoe and gone home after an argument, without telling anyone. As news of their disappearance made headlines all over France, the couples decided to stay in hiding "fearing the consequences of their actions".

A friend eventually alerted authorities to the fact they were actually safe and well.

Authorities in France, who were initially relieved, decided to make public the cost of the search and rescue operation on Monday to make it clear that it does not come cheap, and to encourage tourists to be more responsible.

About 40 rescuers, backed up by a helicopter, divers and sniffer dogs, scoured the picturesque emerald lake and its surroundings for two days, in a rescue operation closely followed by local media.

In a joint statement released by local prosecutors in Draguignan and the prefecture of the Var region, authorities said people must “warn police if they change their plans so rescue services can be deployed where they are needed”.

The owner of the canoe rental company Gerard Lacroix expressed his "anger at the irresponsibility" of the tourists for not coming forward earlier.

Despite the obvious waste of time and money the couples had caused police, authorities say they cannot be prosecuted.

Their only punishment is to incur a €35 fine for going into a part of the lake that was forbidden.

Every summer holidaymakers flock to the Lac du Sainte-Croix, renting canoes and paddle-boats to make their way up the Gorges de Verdon, a spectacular river canyon that is 25 kilometres (16 miles) long and up to 700 metres (2,300 feet) deep in places.