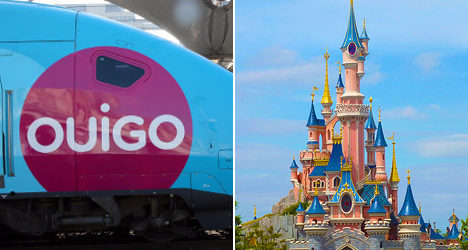 The new Ouigo low cost service run by SNCF, which starts in Marne-la-Vallée (Seine et Marne) near Disneyland was due to depart for Marseille on Monday night at 20:44 but was cancelled due to “radio failure within the train”.

Passengers were handed the usual 50 percent refund on their tickets as well as a free seat on a train that was leaving the following morning.

And on top of that some lucky passengers were treated to a free night at the nearby Disneyland Paris themepark.

“We accommodated 169 passengers in 71 hotel rooms” said a spokesman for Euro Disney, the company wich runsthe them park.

The delayed passengers were given rooms in the Disney themed hotels, though as yet there have been no reports as to whether this included breakfast with Mickey Mouse.

Other passengers however had also wished upon a star and managed to get seats on the next train rather than spend the nigt with goofy and co.

Scores of other passengers who lived close by to the station were forced to return home for the evening.

Ouigo, which links the French capital to Marseille, Montpellier and Lyon, was launched earlier this year as a low cost service aimed at rivalling budget airlines. Tickets start from just €10.