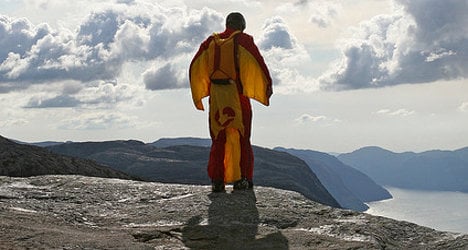 A wingsuit flyer about to take a jump. File photo: Hakon Thingstad/flickr

In the latest death to hit the sport of wingsuit flying, a 41-year-old Frenchman was killed on Saturday after jumping from the summit of the Dent de l’Arclusaz (2, 041m) near the village of Saint-Pierre d’Albigny.

The alarm was raised when the man's friend, who also took part in the jump, did not see him land. The emergency services, with the help of a helicopter search team, managed to find the victim's body at around 8pm.

“It is not yet clear what exactly happened,” an officer from the French gendarmes told French media.

Since the beginning of summer five people have died in the Alps while taking part in the high-risk sport, – described as a combination of hang gliding and sky-diving.

Wingsuit flyiers wear a jumpsuit that uses special fabric to increase the surface area of the body, which allows the jumper “to fly” as they launch themselves from either a "base jump" or an aircraft.

The suit allows the “flier” to freefall for much further than a skydiver, before they open a parachute. But the sport is considered more complicated and therefore more risky than straightforward skydiving.

Those risks have been highlighted in the last week, which has seen three jumpers die in the Alps.

Saturday’s fatal accident came just a day after a Polish man was killed in the Haute-Savoie region of the French Alps.

Earlier last week Briton Mark Sutton, a paratrooper who took part in the memorable James Bond stunt at the London Olympics, died while wingsuit flying. Sutton hit a ridge near the town of Martigny, Switzerland, close to the border with France.

Earlier this year, a German wingsuit flyer was killed when he hit a rocky outcrop in Chamonix and on August 13th another base jumper died in the Isère region of the Alps.

Last year the mayor of Chamonix took the drastic step of banning wingsuit jumps from areas accessible by ski lifts after the death of a Norwegian jumper, who died when his parachute failed to open.

In a town known for its extreme sports, the ban caused controversy until it was lifted in July this year, under certain conditions.

Jumps from the Brevent cliff and Aiguille de Midi are now permitted again, from June 1st until September 30th, but not between 10am and 3pm. A board listing the rules for base jumping has also been placed at jump sites.

Erich Beaud, who was the first man to perform a base jump off a cliff in France in 1989 said the new wingsuits can be dangerous for inexperienced jumpers.

“Some people are confusing video games with reality. You don’t get a second chance in a wingsuit,” he underlined.

But others who know the sport well say the wingsuits themselves are not the dangerous factor.

"It is not the wingsuit that is dangerous but base jumping," Yann Cavé trainee teacher at Savoie Voglans skydiving school told Le Dauphiné Liberé.  He notes that it is much safer to jump from an aircraft than from a cliff and so the the two disciplines should not be confused.

Other professionals denounce the irresponsibility of some jumpers, who are to eager for the thrills and not prepared to learn the skills.

“You need to pass through the levels step by step before moving on," wingsuit teacher Stéphane Zunino the Alps told French rado Europe1.

"Often people take short cuts because things are not going fast enough for them. They want to go straight to higher places where the flying is better.

“We have many people contacting us, without ever having done a skydive from a plane. They think you can just go in a wingsuit like you would go canoeing in a river on a summer holiday.

Watch a wingsuit flyer perform a base jump in this video below.