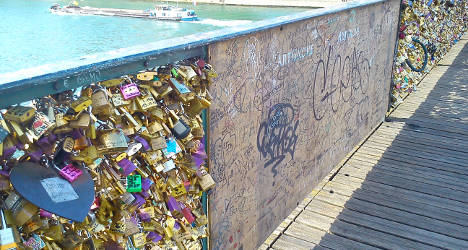 Overwhelmed by love: A section of the Pont des Arts in Paris, replaced after succumbing to the weight of some of the bridge's thousands of "love locks." Photo: The Local

The iconic Pont des Arts bridge across the Seine in the French capital has for years drawn thousands upon thousands of lovers to take part in a romantic ritual.

They buy a padlock, inscribe their names on it, look around for a gap on the bridge’s side grill, and by securing the lump of metal to it, make a wildly romantic gesture of public and undying love and devotion.

But love, it seems is not without its risks, and one local lawmaker has called for the locks to be completely removed from the bridge every six months, warning that the weight of all that metal could cause a fatal accident.

“Since this walkway overlooks the Seine, and there are a lot of tourist boats that pass under it, any relatively heavy object falling from a certain height could cause a passenger an injury, or even a fatal blow,” Mayor of the city’s 6th arrondissement, Jean-Pierre Lecoq told RTL radio on Sunday.

The collective weight of the “love locks” has now reached “many tonnes, without a doubt,” according to a technician interviewed by France 3 television.

At the moment, Paris authorities are keeping a regular check on the pressure that the weight exerts on the bridge's structure.

“Our agents do regular inspections, and when they find that any part of the grill has been warped by the locks, they remove it, and put a new one in place,” an official told France 3 over the weekend.

But new safety concerns, however, might force the city to replace the locks themselves instead.

Let's Be Frank: 'Love locks are turning Paris into a cesspool'

Lecoq, for one, is proposing that all those symbols of eternal love be removed every six months.

Visitors to Paris looking to express their mutual adoration, however, have alternatives to the Pont des Arts, for now at least.

After the "love locks" mysteriously disappeared from the Pont des Arts one night in May 2010, outraged romantics carried on the ritual on the Pont de l’Archevêché, next to Notre Dame cathedral.

City authorities, who had vowed 10 days previously that "the locks would be removed, eventually [from the Pont des Arts]," denied they had been involved in taking them.

Since then, the Passerelle Léopold-Sédar Senghor, between the Musée D’Orsay and Jardin des Tuileries, has also become a hotspot for committed couples.

Click here to find out more about the No Love Locks campaign. 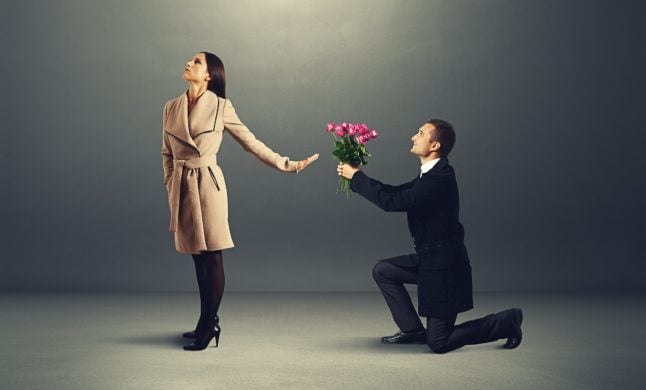