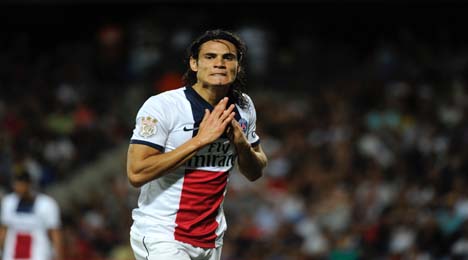 Edinson Cavani, the French league's most expensive player of all time, saved Paris Saint Germain from a humiliating defeat with a late goal on his debut to snatch a 1-1 draw against Ajaccio on Sunday.

Laurent Blanc was handing a first start to Cavani, who joined PSG from Napoli for 64-million-euro ($85 million) — the 26-year-old Uruguayan lining up in a dream strike partnership with Swedish hotshot Zlatan Ibrahimovic.

Yet it was modest Ajaccio who took control with their first attack when Benoit Pedretti curled the ball in to the far corner from outside the box on nine minutes.

Ajaccio then had to dig deep as PSG went on the attack, but the Corsican visitors held firm until Cavani levelled with just four minutes left on the clock.

The new arrival sent the Parc des Princes fans wild when running onto Hervin Ongenda's pass, and firing into the top corner.

"I am not going to make the same excuses, but we did not have the same energy as our opponents," said Blanc, whose side have drawn their first two games.

"We are disappointed and frustrated. We will have a full week's work because, yet again, we weren't ready."

Emmanuel Riviere stole his Colombian teammate Radamel Falcao's thunder as his hat-trick carried Monaco into joint top spot with a 4-1 thrashing of Montpellier.

Monaco had followed up their opening day's 2-0 victory over Bordeaux to move up to six points alongside Lyon, Saint-Etienne and Marseille and second on goal difference.

Manager Claudio Ranieri was more than pleased with his expensively assembled side's showing.

"At the moment, it's perfect, two matches, six points," said the Italian.

"I'm satisfied, it's important to win but also to play well and I'm happy about that. As for Riviere, well he trains every day with character and professionalism and he's in good shape physically and mentally," added Ranieri.

The former Premier League and Serie A coach dismissed reports of Falcao making a move to Spain or England.

"They are just rumours, always rumours and just to make up stories. Falcao is staying here, he's happy and his daughter was born here," he said in reference to the birth of the Colombian's newborn daughter during the week.

Monaco took the lead on 18 minutes when Argentine Lucas Ocampos took off on a weaving run before being hacked down in the box by Siaka Tiene, leaving the referee little option but to point to the spot.

Falcao stepped up and sent Montpellier goalkeeper Laurent Pionnier the wrong way as he made it two goals from two matches since his reported 60 million euro ($80 million) transfer from Atletico Madrid.

The lead lasted just six minutes when a second Colombian, this time Victor Hugo Montano, got the better of defenders Ricardo Carvalho and Eric Abidal before powering home a header from a fine cross from Benjamin Stambouli on the right wing.

The 2004 Champions League finalists then went back in front in controversial fashion on the stroke of half-time when Riviere clearly tugged Montpellier defender Daniel Congre on his way into the box before chipping the ball over the on rushing Pionnier.

Riviere then gave Ranieri's men a cushion 12 minutes after the break when he kneed the ball home following a corner from Yannick Ferreira Carrasco before the 2012 champions had Congre sent off on 63 minutes.

It was his seventh goal in seven matches for the 23-year-old when playing against Montpellier in Ligue 1.