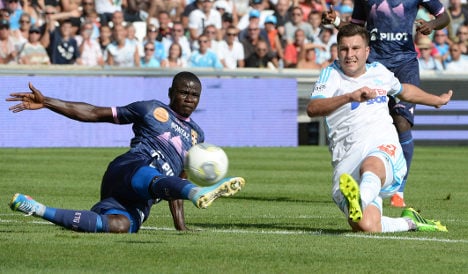 Lyon, who defeated Sochaux 3-1 on Friday, lead on goal difference with the trio of teams locked on maximum points after two outings.

At the Velodrome, French international Andre-Pierre Gignac inspired Marseille to a 2-0 defeat of Evian with a brilliant opener on 16 minutes before the home side then made the points safe with 23 minutes left when Dimitri Payet pounced on a rebound for his third goal of the young season.

"We've got six points, scored five and conceded one so we've got our season off to a very good start."

Saint-Etienne, who picked up their first silverware last season since winning the league in 1981 title when they won the League Cup, continued where they left off with a deserved 1-0 win over promoted yet pointless Guingamp.

The only goal of the match was a flowing move on 52 minutes that was superbly finished off by Fabian Lemoine after a one-two on the edge of the box.

Bordeaux gave themselves a hard nights' work when defender Marc Planus was shown a straight red card after just 28 minutes for a shocking tackle on Israeli international Eden Ben Basat but managed to escape with a 1-1 draw at Toulouse.

The visitors, who last won the title under current PSG coach Laurent Blanc in 2009, took the lead just before half-time when Malian international Cheick Diabate broke the offside trap and beat Toulouse keeper Ali Ahamada with a close range finish.

The lead lasted just two minutes however as Toulouse equalised through Ben Basat who shook off an earlier disallowed goal and blasted home a loose ball after a mixup in the Bordeaux defence.

Europa League hopefuls Nice bounced back from their 4-0 thrashing at Lyon last weekend with a 2-1 win over Rennes as they got off to a bright start with a 20th minute opener from Argentine Dario Cvitanic against Rennes.

Rennes got the perfect tonic before half-time when Nelson Oliveira scored in the dying seconds of the opening 45 minutes before a defensive howler put Nice back in front.

An unforgivable mistake from Nigerian Ejike Uzoenyi – who was last man back – handed the ball on a plate to Jeremy Pied who calmly slotted in past astonished Rennes 'keeper Benoit Costil for three priceless points.

Bastia were also the benificiaries of poor defending as they notched up their first points of the season with a 2-0 win over Valenciennes thanks to a Gianni Bruno tap-in with 14 minutes left before a powerful header from Adama Ba three minutes later carried the Corsicans home.

Elsewhere, Reims handed new Lille coach Rene Girard his first defeat since moving from Montpellier where he won the 2012 title as they ran out 2-1 winners just outside Paris.

Champions Paris Saint-Germain host Ajaccio on Sunday and Monaco have their home opener against Montpellier while the other match features Lorient at home to Nantes.