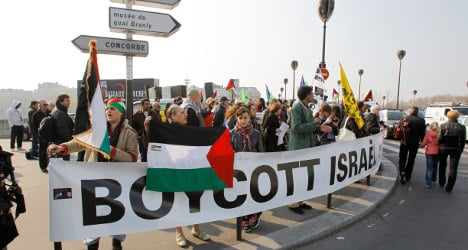 Pro-Palestinian activists, not including those acquitted on August 14th, call for a boycott of Israeli products in Paris in 2010. Photo: Patrick Kovarik/AFP

The court in Perpignan upheld a recommendation from prosecutors that the three be found not guilty for the boycott call, made during a protest at a shopping centre in the southern city in 2010.

The activists were charged following a complaint from the BNVCA anti-Semitism group, which launched a series of legal actions against activists calling for boycotts of items produced in areas annexed by Israel following the Six Day War of 1967.

Prosecutors had said there was no evidence the boycott call by Jeanne Rousseau, Yamina Tatjeur, and Bernard Cholet  was an incitement to hatred or violence.

"This is a recognition of our fight for peace and justice," Tatjeur told AFP after the ruling.

Wednesday's acquittal is not the first occasion in recent months that a French court has ruled in favour of pro-Palestinian activists.

In April, The Local reported how Air France was forced to pay €100,000 in damages for discriminating against a pro-Palestinian activist.

Horia Ankour had been attempting to travel to Israel to take part in the "Welcome to Palestine" campaign, which saw hundreds of activists seek access to Israel in a bid to travel to the Palestinian territories.

The nursing student  was ejected from a plane in Nice, southern France, which was destined for Tel Aviv, after an Air France employee asked if she was Jewish, and she replied "no."