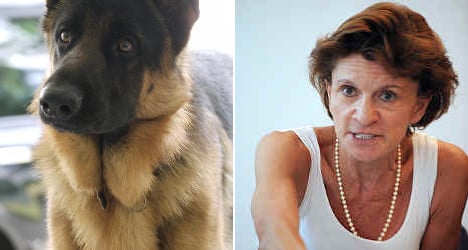 Michèle Delaunay, France's minister for the elderly, is in hot water for the second time in a matter of months thanks to the actions of her German Shepherd, Dixie.

The dog bit a 9-year-old boy on Gravière beach in the Landes region of south-west France on Sunday, Le Parisien reports. The incident comes just months after Dixie allegedly sunk her teeth into a policeman, although Delaunay strongly denied the mauling took place.

In a statement on her blog, minister Michele Delaunay denounced the media for blowing the reports out of proportion, saying a French radio station had "devoted an equal amount of time" to the dog story as to "the bloody clearing" of protest camps in Cairo.

In Sunday's incident, Delaunay was walking Dixie along the shore when her lead broke and the dog made a dash for the small boy, biting him on the lip and giving him a heck of a fright, reports Le Parisien.

A source close to the minister played down the incident, telling local paper Sud Ouest that it was “more of a scratch” than a bite and that the child was “more scared than hurt.”

Keen to make amends, the source told Sud Ouest that the minister "invited the boy and his mother to come and see her and her dog again so that the boy won’t be traumatized.”

However, this isn’t a first offence for Dixie.

The German Shepherd reportedly bit a police officer in Bordeaux in March, which sparked a political row.

Delaunay claimed  Dixie only ”barked and jumped in his direction” and that she was simply “doing her job as a German Shepherd” to protect her owner.

The minister claimed it was all part of a conspiracy “motivated by politics” over a “non-event” during the run-up to local elections.

In her latest blog entry she said: "There was no injury, not a scratch on the officer's clothing, not even a trace of dust."

"There is no doubt that if (the dog) had bitten the child or the municipal police officer, this would be another matter… But Dixie has never bitten," she wrote.

The police-biting incident was pounced on by members of the rival UMP party, with one former minister, Dominique Bussereau, retorting: “Knowing the character of Mme Delaunay, it was lucky that it was the dog and not the minister that bit the policeman."

The German Shepherd's most recent misdemeanour was also snapped up by the Twittersphere, as is the norm these days.

"Imagine if Michèle Delaunay had bitten a child, or a dog. That would have been an even bigger bite," tweeted Camille Polloni.