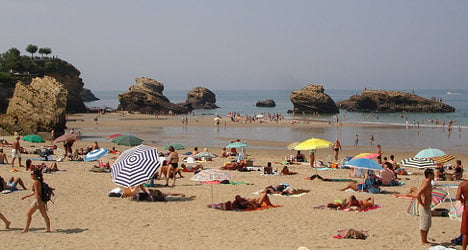 The ‘Naturist Village’ at Cap d’Agde on the Mediterranean coast of southern France, is right in the middle of its busy season.

That means 45,000 holiday-makers coming and going every day – many of them families with children.

And wherever there are naked people, there will be voyeurs, camera crews and other undesirables.

Authorities at the popular and high-end resort, however, have gone to extraordinary lengths to ensure the safety and privacy of their lucrative visitors.

Among the measures taken: A full-time security team of 25, a three-man unit with a guard dog patrolling the perimeter of the private village day and night, 24-hour videosurveillance on the outside of the resort, and a system of electronic swipe cards to get in and out.

An extra step to ward of voyeurism – new arrivals to the resort can’t check in to the reception centre to get their swipe cards after 8pm.

“After that hour, you’re not going to the beach, save for exceptional circumstances. Entry is prohibited,” Agde mayor Gilles d’Ettore told regional daily Midi Libre on Monday.

One of the results of this maximum security nudism, is that for seven months during spring and summer, until the resort closes on September 30th, Agde has the lowest number of thefts, assaults, and other crimes, in the local area.

These safety measures appear not to be over the top, either. Just last month The Local reported how a British businessman was caught and charged by police for secretly filming teen and pre-teen girls on the beach at Cap d’Agde.

The 41-year-old had been seen wandering through the sun bathers and regularly stopping for periods of time next to young girls.

Naturists became concerned and alerted the police, who reportedly discovered a miniature video camera, hidden among a bunch of keys.

The man, whom Midi Libre says recently left his wife and family, is from the Sussex town of Bexhill-on-sea, and is set to appear in court in France in November.

NUDITY
Bare necessities: The rules for taking your clothes off in France
Url copied to clipboard!