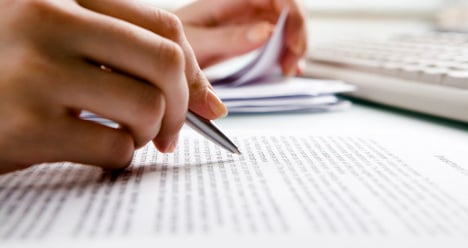 The French government had announced contentious plans in June to cut the current earning limits on the country's self-employed, or auto-entrepreneurs as they are called.

The move sparked uproar from auto-entrepreneurs who claimed they would be forced to ditch the popular and simple business model. It appears their voices have been heard.

A document seen by French financial daily Les Echos suggests that France’s 893,000 registered auto-entrepreneurs, including thousands of ex-pats, will in the end, not be subject to the reduced earning limits.

The French cabinet is set to debate the bill later this month, but Les Echos, which claims to have seen a copy of the bill, says all mention of the reduced limits has been deleted from the text.

"This would be great news for auto-antrepreneurs," Nice-based consultant Andy Dennison, who runs the website MonAmiAndy.com told The Local.

"This would have pushed a lot of people off the scheme and forced them to set up a limited company."

Since 2009, around one million people are believed to have signed up to the auto-entrepreneur status that was launched by former president Nicolas Sarkozy.

It offers the self-employed an easy way to set up their own business and allows them to pay social charges as they earn rather than upfront.

Critics of the legislation claimed that although the decreased limits would have affected 11 percent of AEs, they would have dissuaded many people from signing up to it and effectively brought about its demise.

In May, The Local reported how a group called “The Chicks” set up an online movement to fight the proposed reforms.

“We cannot and we must not accept the denial of social democracy that would lead to the destruction of our businesses, jobs and the growth of entrepreneurship in France,” read a statement on the website.

Government coffers could have lost money

Dennison believes the government may have ended up losing out anyway because auto-entrepreneurs may have been inclined not to declare their total revenue.

"A lot of people would have felt forced to under-declare. People who have done everything by the book would suddenly have been told they cannot earn more than €19,000. That would have had a knock-on effect on France's social security system, which already has a gaping black hole. "

The new Socialist government wanted to introduce changes to the AE system to crack down on those abusing a system that was originally designed to help those who wanted to work more and earn a second income.

President François Hollande launched a project in the spring to gather expert testimony on tradespeople and small businesses, with a view to legislating this autumn.

Trades Minister Slyvia Pinel isset to present the reform bill to cabinet on August 21st, with the proposals coming into law in September if they pass through parliament.

Setting up a limited company has its bonuses

The proposed changes were made despite a report commissioned by the government that called for ministers to maintain the simplicity of the AE scheme.The government believes the system puts regular tradespeople at a disadvantage because auto-entrepreneurs pay less social charges.

Companies often prefer to commission auto-entrepreneurs over regular, established employees, because they will incur less costs.

Once auto-entrepreneurs go above the limit they have to set up their own limited company, which has both benefits and disadvantages, as Dennison points out.

"One of the good things about a limited company known as a SARL, is that they can run at a loss if that's ok for you. Banks and businesses are also more likely to trust SARLs than auto-entrepreneurs, which means it is easier to get a loan, and so on.

"There are, however, more costs involved and you need to make sure that you will earn a certain amount to cover those costs. You need clear objectives each year.

"If you have that and you can reach them, then a SARL is more beneficial in the long run."