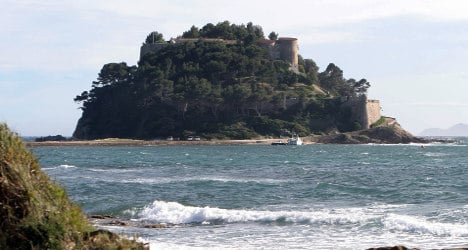 Will the presidential summer residence of Fort Bregançon be sold off or perhaps turned into a museum? Photo: Eric Estrade/AFP

A 17th century fort perched on a rocky island in the pristine waters of the Mediterranean sea in the south of France seems like the perfect place for a holiday.

But Fort Bregançon, which comes with its own helipad and private beach, is not to everyone’s liking, not least the French president’s.

The fort is the official summer residence of France’s head of state but it will remain empty this summer – at a cost to the taxpayer – after Hollande decided to spend his holiday elsewhere.

Hollande spent last summer at Bregançon shortly after being elected to the Elysée but it's fair to say he did not have a relaxing holiday.

“Bregançon is fine, apart from the fact that you are locked in, just like at the Elysée Palace. When you are on holiday you are supposed to be free and to be able to escape,” he told reporters. He was also criticized in the press for swanning around the seaside at a time when the country's economy was in crisis.

Hollande however is not alone in his dislike of Fort Bregançon. His predecessors in the Elysée were also not big fans.

Despite making the island an official residence of presidents in 1968, General Charles de Gaulle rarely went there, preferring to spend his holiday’s in Colombey-les-Deux-Églises, in the north east of the country.

François Mitterrand also stayed away from Bregançon and Jacques Chirac said the place used to drive him mad. Nicolas Sarkozy was more likely to spend the holidays with the Bruni-Tedeschi family a few kilometres away at Cap Nègre.

According to reports in the French media, the fort costs the French taxpayer €226,000 each year to maintain. At €619 the cost is not particularly steep, but French tax payers will not be happy, especially if it continues to remain unused. A fact that has not been lost on the French media this summer.

Hollande’s rejection of the Fort has raised questions about its future with some politicians suggesting it should be sold off or turned into a holiday camp for disadvantaged children.

Charles de Courson, a deputy for the centre-right UDI party, has called for the fort to be put on the market.

This might not be such an outlandish suggestion given the Elysée Palace has already sold off its wine collection this year as well as cutting the Republic Guard down to size, all for the sake of cutting costs.

But French daily Le Parisien has suggested the Elysée is not in favour of this option. The newspaper reports a more likely option is to open up the availability of Bregançon to the heads of states of foreign countries.

This option is not likely to go down well with the French given the cost of the renovations that would be needed before Bregançon would be fit enough to welcome the likes of US President Barack Obama or the British PM David Cameron.

Another option the Elysée has reportedly considered is to turn the residence into a museum, which would be open to the public.

This would be in line with a similar move by the Elysée Palace in 2008, when after a report from state auditors, it handed over two of its residences – the Château de Rambouillet and the Domaine de Marly-le-Roi to the Ministry of Culture, so they could be open to visitors.

However Ian Brossat, a communist party councillor in Paris, suggested the fort would be put to better use by being turned into a holiday camp for disadvantaged children who never get a chance to go on holiday.