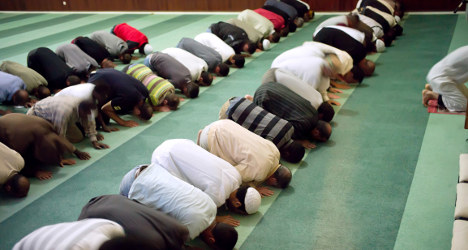 French police have arrested a young soldier on suspicion of planning to fire shots at a mosque near the eastern city of Lyon, the interior ministry said Sunday.

The 23-year-old man, who investigators say is "close to the radical far-right", was detained at his airbase near Lyon.

He was remanded in custody on Wednesday and charged with the possession of ammunition and plans to damage a place of worship "in connection with a terrorist enterprise".

Judicial officials said he told investigators that he planned to fire the shots at the Minguettes mosque at Venissieux, a Lyon suburb, on Thursday at the end of the Ramadan holy month.

He also admitted to throwing an incendiary device at a mosque door in southwestern Libourne in August last year. No one was hurt in that incident which did not cause any damage.

Relatives had contacted the police after finding suspicious documents in his possession.

According to reports in French radio site Europe1 the soldier was "lonely psychologically unstable and had been through a difficult time in his love life".

Police sources also told Europe1 the soldier had tried various time to make contact with Maxime Brunerie, a far right sympathizer, who was jailed for an assassination attempt against then President Jacques Chirac in 2002.

Muslim leaders in Lyon claim the attack represents signs of a rise in the anti-Islamic feeling in France.

"The fact that a soldier was arrested for a planned attack demonstrates there is a climate of Islamophobia in France today, we cannot close our eyes to this,” Kamel Kabtane, rector of Lyon’s Grande Mosque told AFP.

A demonstration calling for greater protection for Muslims is set to be held outside the mosque at 5.30pm on Monday.

A statement from the ministry read: "The interior minister reiterates his determination to fight against all forms of violence that are inspired extremist ideologies; that affect the values ​​of the Republic and whose sole objective is to create tension in society and spread a climate of hate."

"It will simply not be tolerated," the statement added.