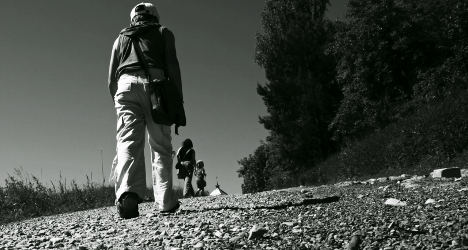 Anti-gay marriage pilgrims are marching across France in the direction of Paris. File photo: Petras Gagilas

“Les Veilleurs” (The Watchmen), as they call themselves, began their odyssey on Sunday, setting off from Rochefort, in the western department of Charente-Maritime.

The 20-strong group of gay marriage opponents plan to walk for 20 days, before reaching the French capital, around 500km away, on August 31st . They plan to hold nightly debates on the issue and try to convince passersby of the worthiness of their arguments along the way.

“Our gathering is open to everyone, regardless of your convictions,” a spokesman named only as Gaultier, told AFP.

“You don’t have to have protested against the [gay marriage] law. [Our aim] is to go and meet the French people, and to open up our evening assemblies to other problems and difficulties,” he added.

Around half of the philosophical pilgrims are university students on their summer break, according to Europe 1 radio, but there are also professionals and retirees among them.

Its very first discussion groups took place in Paris in April, amid a backdrop of surging frustration among gay marriage opponents, clashes with riot police during protests, and a steep rise in the number of violent homophobic attacks in France.

Les Veilleurs, who describe themselves as a "non-violent group", have drawn criticism in recent weeks for failing to formally register their public gatherings and protests with authorities.

On the night of July 3rd, for example, 200 or so demonstrators, under the umbrella of Les Veilleurs, assembled in front of the Elysée Palace in Paris, blocking access to the presidential palace’s entrance in an unannounced protest against gay marriage.

Despite being legalized in May, gay marriage has faced continued opposition from certain quarters, although the once-mainstream Manif Pour Tous (Demo for All) movement has become increasingly marginalized in the passing months.

In June, The Local reported how the mayor of a southern French town was warned by Interior Minister Manuel Valls, that he risked a three-year jail term and €45,000 fine for refusing to marry gay couples.

In May, on the eve of France’s first ever gay wedding, political expert Jean-Yves Camus, from France’s Institute of International Relations and Strategy (IRIS), told The Local it was time for opponents to lay their down their arms and accept defeat.

“It’s totally foolish to continue this movement,” Camus said. “We are in a democracy and the law has been passed and the Constitutional Council ruled that the law entirely conformed to France’s constitution.

“It is not possible for the right and the extreme right to continue to mobilize like this. Only the smaller groups will continue to demonstrate against the left,” Camus said at the time.

“These extreme groups are made up of totally crazy people, they are totally nuts. It’s possible there will be more violence…but it will die slowly,” he added.