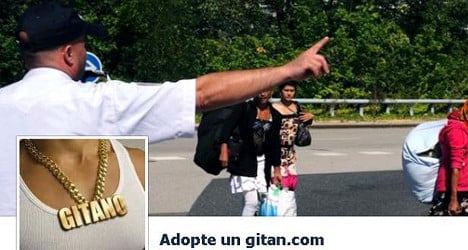 A screengrab from the 'Adopt a Gypsy' Facebook page. A Roma rights group in southern France has filed a complaint against Facebook for "incitement to racial hatred." Photo: Facebook

Amaro Drom, a Roma rights group based in Bouches-du-Rhône in southern France, has filed a complaint of “incitement to racial hatred” against a controversial Facebook page, according to a press release on Thursday by its president Véronique Labbe.

The charges relate to a page on the social networking site calling itself “Adopt a Gypsy.”

“We cannot allow this flood of hatred against the gypsy community on a social network,” said Labbe.

As of Friday morning, the page appeared to have been shut down by Facebook, but reports in the French media describe its contents as mocking, bigoted and incriminating against travellers and members of the Roma community.

In her complaint, shared on her blog, Labbe cites one post featured on the page: “Gypsies? We shouldn’t adopt them, we have to eliminate them.”

At one point it had garnered at least 427 ‘Likes’ from users of the social network, and after appearing to have been shut down earlier in the week, was reopened on Tuesday.

Speaking to The Local on Friday, Labbe, whose group Amaro Drom translates as ‘Our Road’, said the episode was far from resolved by Facebook shutting down the page.

“Well, it was already closed down once, and then it was opened again on Tuesday – why?”

“So this is definitely not the end of the story,” she added.

Two rival Facebook pages – Pour la fermeture de Adopte un gitan.com (For the shutting down of Adopt a Gypsy) and another taking a name similar to the original page – were set up on Monday and Tuesday and have a total of more than 1,000 ‘Likes.’

A court in Aix-en-Provence confirmed to AFP that police in Gardanne had forwarded the formal complaint to it.

The ‘Adopt a Gypsy’ incident is only the latest controversy involving public statements about the traveller and Roma communities to hit France recently.

On Wednesday, The Local reported how one French mayor had taken the extraordinary step of threatening to kill himself if a group of travellers returned to his tiny village.

The 85-year-old right-wing firebrand made comments in Nice on July 4th where helabelled the local Roma community a “smelly” and “rash-inducing” presence in the southern city.