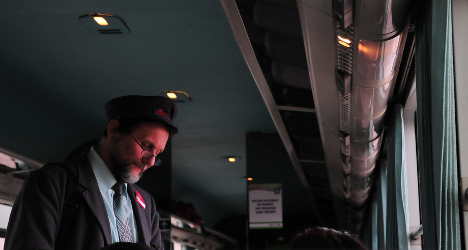 An SNCF inspector serves a train customer. A row has erupted over a contract for credit card payment machines going to a US-based company. File photo: m-louis/Flickr

France’s state-owned rail provider SNCF has denied claims that it is “unpatriotic,” following the company’s decision to outsource the supply of ticketing equipment to an American-owned company, despite a bid from a French firm.

The criticisms were made by Florian Philippot, vice president of the country’s far-right National Front party after the SNCF appealed to the California-based company VeriFone Systems for the supply of 12,000 ticket machines to be used by ticket inspectors on the rail network.

Speaking on Europe 1 radio, Philippot denounced the outsourcing as “seriously scandalous,” adding “as a major national company, [SNCF] should equip itself with French products…especially when there are French companies in the running.”

Ingenico, a French firm which provides similar services and products  to banks such as Crédit Mutuel, was overlooked.

In a statement, SNCF denied the claims, saying that the French company Nomadvance, a subsidiary of Aéroports de Paris (ADP), had appealed for offers for a subcontractor to supply its payment software, which brings in €500,000 a year.

Although VeriFone is an international company, the statement stressed that “All the machine-operators at VeriFone are located in Aubervilliers in Seine Saint-Denis, and all the VeriFone engineers are in Montpellier, adding that all of the company’s employees “are based in France”.

Representatives from neither SNCF nor Nomadvance were available for comment.