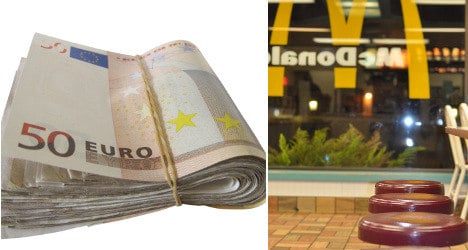 It could have gone down as the biggest tip in the history of McDonald’s restaurants.

A distracted customer of the US fast food chain in southern France somehow “forgot” a particularly important item when he left after a meal this week – a backpack containing €25,000 in cash.

The young man went to the McDonald’s at Avignon, in the department of Vaucluse, for lunch on Tuesday, only to leave behind the package.

Realising his error some minutes later, he ran back into the restaurant panicking, and asked staff if they had seen his bag.

With the princely sum nowhere to be found, the diner must have thought the worst.

However, at around the same time the next day, an envelope containing a wad of cash was found buried in the diner’s rubbish bins.

Having been given the forgotten pile of money by workers, local police notified its owner by phone.

Before handing it over, however, officers were told by the absent-minded proprietor that he had earned it in a property deal, according to local daily Le Dauphiné Libéré.