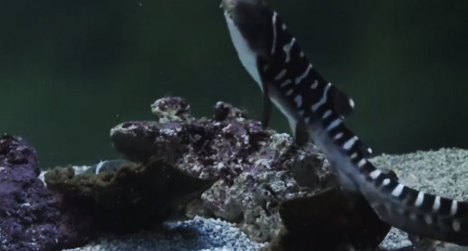 For the first time, the birth of a zebra shark, a rare tropical species native to the Indo-Pacific region, has been captured on film (see video).

Trainers at the Océanopolis aquarium in Brest had spent 20 days waiting for the "exceptional moment", according to a statement released by the aquarium.

The zebra shark, which is now on display at the aquarium, is one of three recently born at the aquarium, with the first arriving on June 10th, the second on July 30th and the latest on August 3rd. Two eggs have yet to hatch.

The rare footage will also feature in a documentary called ‘Sharks: in pursuit of received ideas’, coproduced by a dozen French aquariums. It will then be presented at an oceanography film festival on October 20th until November 1st.

According to the aquarium’s website, the zebra shark can measure over three metres long. While they are not an endangered species, they are a vulnerable species due to over-fishing and their fins are sometimes sold on the Asian market.

The following is a video of  the historic moment from iTele.