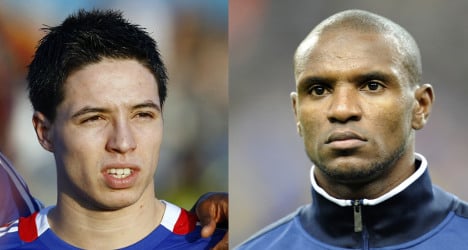 Samir Nasri and Eric Abidal have been recalled to the French squad. Photos: AFP

Eric Abidal and Samir Nasri were both recalled to the France team for the first time in over a year on Thursday as coach Didier Deschamps named a 23-man squad for a friendly match against Belgium in Brussels next week.

Abidal, 33, joined Monaco in July after Barcelona opted not to renew his contract and won the last of his 61 caps for Les Bleus in February 2012 before undergoing a liver transplant that sidelined him for just under 12 months.

"He joined Monaco and he got through the pre-season quite well. I followed the warm-up matches, where he was very much at ease. He has international experience, he's been through several competitions," said Deschamps, explaining his decision to recall the defender.

"He's played 61 times for France. In relation to that and the need for players with international experience, after discussing with him at length his state of mind regarding his selection, I took the decision to recall him."

Nasri, 26, last turned out for France at Euro 2012, after which the Manchester City midfielder was banned from the national team for three matches following a spat with a journalist following the quarter-final defeat to Spain.

Sevilla midfielder Geoffrey Kondogbia, a member of France's triumphant under-20 World Cup side this summer, was also called up for the first time.

On the same days the squad was made public former French international footballer Luis Saha announced his retirement from the game.

Former France striker Louis Saha announced on Thursday that he is retiring from professional football.

"Want to thks all managers, all staffs, all teammates, all opponents, all fans, for all support and love towards me during my football career," he said.

"I will stop to be call a professionnel footballer and wish many young talent to enjoy as much as me my football. Love you and thx again."

Saha began his career at Metz in 1997 before moving on loan to Newcastle in the second half of the 1998-99 season.

He came back to England in 2000 when he joined Fulham and his form there saw him catch the eye of Alex Ferguson, with a £12.8 million move to United ensuing in January 2004.

He won the Champions League in 2008 and two Premier League titles during his four-and-a-half year spell at Old Trafford, before moving on to Everton.

Further spells at Tottenham, Sunderland and Lazio came as his career wound down.

He also played 20 times for France, scoring four goals and taking part at Euro 2004 and the 2006 World Cup, where he helped France reach the final, for which he was suspended.