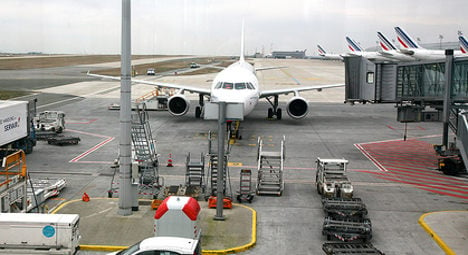 A plane at Charles de Gaulle airport, where a Delta airlines Airbus 380 plane took off on Wednesday before being diverted. Photo: Vincents Desjardins

A Delta Airlines Airbus headed from Paris to the US with over 300 people on board was on Wednesday diverted to Amsterdam because of a problem with its flaps, the airline said.

"On take-off from (Paris hub) Charles de Gaulle, Flight 99 to Detroit was unable to retract its flaps," an airline spokeswoman who asked not to be named told AFP.

"As a precaution the flight will be diverted to an alternate airport," she said.

A plane's wing flaps help an aircraft gain or lose altitude by being raised or lowered.

Amsterdam's Schiphol is the top choice but depending on weather conditions the flight could be diverted to London instead.

A spokeswoman for Dutch air traffic control said the plane had been circling over eastern England to burn fuel before trying to land.

"It was too heavy to land so it had to circle over England to lose weight," Bertine Langelaan told AFP.

She said the plane was due to land at Schiphol at around 1430 GMT.

At least three fire engines have been deployed at Schiphol "as a precautionary measure", Dutch news agency ANP reported.