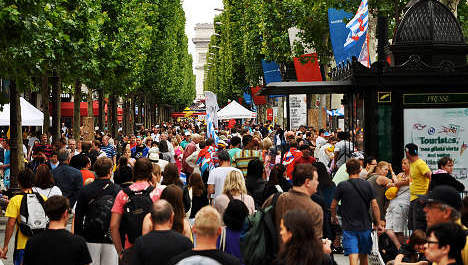 Americans might be the world champions of opinion polling, but the French surely come a close second.

Barely a day goes by in France without a survey appearing on this or that trivial, controversial, serious or downright silly subject.

And summer, it would seem, is the pollster’s busy season.

So without further ado, here are the top eight temperature-takers to have graced the headlines in France so far this summer.

Opinion surveys are not just the domain of France's polling agencies, with the government also getting in on the fun.

A recent government-run poll gave an insight into how the French feel towards climate change with the result showing that many of them don't really feel much at all.

According to the survey by the Commissariat Général au Developpement Durable one in three French people do not believe in climate change or that it was caused by human activity. The survey also revealed that half of French people support nuclear power.

Back in June, Le Parisien and polling firm BVA asked the French whether rocker Johnny Hallyday, on the eve of his 70th birthday, should pack it in. The results? 65 percent thought he should retire now to his sofa, much to the chagrin of the man himself.

“Bring me the people who led this survey. I’ll rid them of their desire to ask stupid bloody questions,” he said.

According to a poll by dating site Meetic, 80 percent of French singles would be open to an affair, and more than half of summer flings don’t last longer than a month. Please file under “Shock” and “Horror.”

5. The 'bucket and spade test'

Ever since George W. Bush won the ‘beer test’ over Democrat rival John Kerry in 2004, political pollsters have been addicted to asking voters any number of questions about the “likeability” of their elected officials.

The French, it would seem, are no different, and with the “grandes vacances” in full flight, polling firm Harris Interactive collaborated with weekly magazine VSD to ask “which politician would you rather go on holidays with?”

Among the male candidates, former President Nicolas Sarkozy came out on top with 19 percent, his penchant for foreign holidays perhaps outweighing the possibility that persistent legal troubles might keep him in France for a while.

Pollsters spent a large part of 2012 and 2013 asking the French if they approved of President François Hollande’s job performance, and an increasing percentage of that public answered “Non.”

And despite the summer being the political off-season, voter surveys continue to make grim reading for Hollande.

This week, fully 84 percent of respondents to a Valeurs Actuelles survey said they didn’t believe Hollande could fulfil his crucial pledge to reverse the upward trend in unemployment by the end of 2013.

US news media are regularly criticised for treating presidential elections as nothing more than “horse races”, and predicting candidates years ahead of time.

But the French press has a similar obsession, and almost since Hollande’s election day last May, pollsters have been looking ahead to the 2017 presidential battle and testing every possible face-off.

As interesting as that outcome is, it’s also worth noting that neither man actually leads his party.

But we also must remember that Melenchon currently holds no office, and got a paltry 11 percent of votes in last year’s presidential election, not nearly enough to put him through to the second round showdown where a face-off with Sarkozy could happen in the first place.

2. 'Praise for a crime against humanity'

Easily the most controversial poll in recent months was the one conducted by Le Point in July, after French deputy Gilles Bourdouleix was recorded suggesting that Hitler hadn’t killed enough gypsies during the Holocaust.

Inviting readers to agree or disagree on whether Hitler slaughtered a sufficient  number of travellers seems so obviously unacceptable as a topic for debate, and predictably, the newspaper’s editorial staff removed the poll from their site after being inundated with complaints.

Despite the redaction, the ERTF (European Roma and Travellers Forum) has filed suit against Le Point for incitement to hatred.

Le Point's infamous 'Hitler' poll. The first choice is "This phrase is unacceptable: praise for a crime against humanity…"  Photo: Screengrab/Le Point

Some polls, however, have become venerable, respected traditions in France, and one of them is the Journal Du Dimanche’s twice-yearly Top 50.

Started in 1988, this survey ranks France’s 50 most popular and significant public figures and has been a sometimes fascinating insight into the public’s mood over the years.

The previous two winners, for example, were former tennis champion Yannick Noah and actor Omar Sy, whose African heritage provoked much debate about multiculturalism in France.